ASOARABE has provided the following information.  Due to the difficult economic situation with hyperinflation and high cost of currency exchange for US dollars, the last few years have been extremely difficult for the owners and breeders in Venezuela.  Some have left the country, others have been forced to stop breeding because there is no market for the foals.  As a result, only 4 foals were registered in 2015.  This did increase to 18 in 2016, and dropped again to 11 foals in 2017.  There were no imports or exports in those years.

The Venezuelan Arabian Horse Breeders Association’s current stud book is volume 3, covering the period 2000-2003. The next volume is due in March 2008. The number of purebred Arabian foal registrations in 2006 was 49. The estimated number of breeding stallions is 25 and the estimated number of active broodmares has increased to 280.

DNA and mandatory parent verification of foals before first registration has been used since 2000. Microchipping is not used. The use of Artificial Insemination, transported semen both imported and exported, and Embryo Transfer are all permitted.

Popular activities are halter and riding classes, western riding, and the Venezuelan national sport, Torros Correados which we can translate as Bull-tailing. Endurance, Western Riding and Bull-Tailing are open competitions in Venezuela, the percentage of registered Arabians which take part in these different activities is about 10%, but with very good results, some of them have been National Champions in western disciplines. In 2006 we didn’t have any racing. Endurance on the other hand continues to increase in popularity, with 8 competitive rides held annually. To promote the purebred Arabian we organize 2 Arabian horse shows and also we have a website. To educate the public on the history, care and uses of the purebred Arabian horse in Venezuela, we write articles about Arabian horses and publicise our results in specialist magazines.

ASOARABE has announced that their 2006 WAHO Trophy winner is the grey stalion Festival. He had done very well at “Bull Tailing” which is the Venezuelan typical sport, winning several important competitions, and also his progeny are doing very well at the same sport. 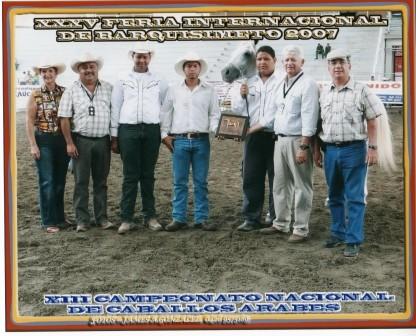 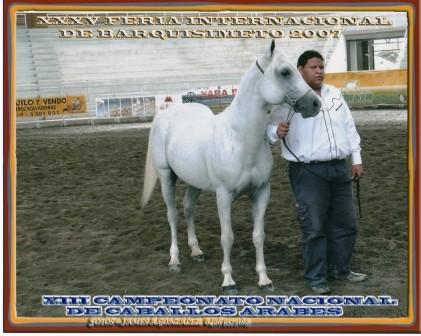 The Venezuelan Arabian Horse Association (ASOARABE) is proud to announce that they have selected the lovely bay mare, DF STAR LAMOLIN as their winner of the 2005 WAHO Trophy.

A beautiful mare with a particularly charming disposition, she has an extraordinary show record, having been Venezuelan National Supreme Champion Mare in both 2004 & 2005. She has also started her contribution to Venezuela’s Arabian horse breeding programme with three excellent foals to date. This delightful mare is considered by her proud owner Reynaldo Herrero to be the most valuable jewel of his Oso Blanco Stud and ASOARABE considers her a worthy winner of Venezuela’s first WAHO Trophy (for 2005).