The Croatian Stud Book has provided the following information. In 2017, 6 foals were registered with 13 broodmares and 8 stallions used for breeding. 3 horses were exported. There was 1 Arabian race and 9 endurance competitions. In 2018, 6 foals were registered and 3 horses were exported. There were 2 Arabian races and 6 endurance competitions.

REPORT MADE AT THE 2017 WAHO CONFERENCE

Petra Bagović, Croatia: Firstly, our thanks go to His Majesty King Hamad Bin Isa Al Khalifa and the Royal family for hosting this wonderful Conference. Mr President, Members of the Executive Committee, fellow delegates, ladies and gentlemen, I am honoured to be here for the first time representing Croatia, along with my colleague and co-delegate Miss Martina Čabrajec. My name is Petra Bagović and I work as the Registrar at the Croatian Agricultural Agency, which is a Government institution responsible for the Central Equidae database for all horse breeds in Croatia, including purebred Arabian horses.

By the end of 2016 we had 147 registered horses, 11 of which are foals, 21 breeding stallions and 38 brood mares. The number of foals is consistent throughout the years without significant decline. We estimate that about 8% of registered horses are participating in sports activities such as races and endurance. There were 3 imports in 2014, from Slovenia, Germany and Russia; 1 from the Netherlands in 2015 and 1 from Poland in 2016. As for exports, there were 4 to Bosnia and Herzegovina in 2013.  Embryo Transfer is allowed but not yet used. All foals are parentage verified by DNA typing and are microchipped.

The last time Croatia attended a WAHO Conference was in 2009. The reason for this is that we had a lot of turbulence and re-organisations, so it took us some time to get back on our feet. The Volume II of the Croatian Stud Book of Purebred Arabian horses was issued recently and covers the period from 2009 to 2016.  Due to the setbacks over the last few years, we haven’t had the chance to award the WAHO Trophy recently. However, we have quite ambitious plans for the near future, which includes educational seminars, shows and helping to promote this breed in equestrian sport. We do have a few breeders who have had success in showing abroad, mostly in Hungary and neighbouring countries.

Finally, Martina and I would like to take this opportunity to thank the World Arabian Horse Organization for their patience and support throughout. Thank you to all foreign Stud Book Authorities for their cooperation, and a special thank you to Katrina Murray for her exceptional professionalism and indispensable help with everything we’ve asked regarding Volume II, or any other inquiries we had.  Thank you.

Compared to 2009, we registered 32% more pure Arabian horses (20 horses) even though we only registered 4 foals in 2010 (compared to 9 in 2009). The reason for this, to our knowledge, is definitely the world economic crisis which has negatively influenced the registration of all horse breeds in Croatia. On the other hand, the interest in Arabian horses in Croatia remains strong, in 2010 we recorded 30 owners located in most counties of Croatia, this number represents an increase of 8 new owners in 2010.

As the National Stud Book we are trying to educate and help owners of Pure Arabian horses, so at least once a year we organize educational lectures. To develop the breed further, we organize an annual Festival of Pure Arabian horses, which was held in 2011 in Gudovac with 19 horses competing in 3 categories. The main goal is the representation and promotion of the breed to a wider audience, combined with encouragement to the breeders to improve their stock. Besides this Festival, Arabians also compete against other breeds in equestrian sports including flat racing and endurance.

Our most recent Stud Book is Volume 1, covering the period 1991-2008. In future we will issue an electronic version, starting with Volume 2. We do not yet have an online database, but our web page contains the latest statistical information about Arabian breeding in Croatia, together with the rules of registration, all necessary documentation and information for owners and breeders on the procedures for reporting breeding activities and changes of ownership.

We are very happy to be part of the family of WAHO which is to the great benefit of Croatian breeders and owners of Arabian horses.

REPORT MADE AT THE 2009 WAHO CONFERENCE

My name is Nidal Korabi and I work as the Registrar in the Arabian Stud Book at the Croatian Horse Breeding Centre Stud Farm Lipik, which is the Government institution responsible for all horse breeds in Croatia. Mr. Mato Čačić, who is sitting beside me, is the Director of this Institution.

Croatia is attending a WAHO Conference for the first time and we are really delighted, even excited, to be here and to represent our country. The breeding of purebred Arabian horses started in Croatia 15 years ago and therefore the numbers are relatively small, but are constantly increasing. By the end of 2008 we had registered 50 horses, 10 of which are foals from last year. The first Volume of our Croatian Stud book of Purebred Arabian horses covers the period of 1991-2008, and the stud book rules and regulations are all according to WAHO rules. Even though we did not use this method yet, Embryo Transfer is allowed and if used, there will be no limit on the number of foals per mare per year that can be registered. All horses are DNA typed and microchipped before registration, while they are still on the dam. The microchip transponder used in the identification are produced according to ISO standard 11784.

Last year we registered 2 imported mares from The Netherlands and 1 filly was exported to Montenegro. The Croatian Stud Book Authority continues to work on organizing activities related to Arabian horses in order to promote the breed in our country. Thereby we have so far organized a couple of shows, where owners could present their best horses.

We will award the WAHO Trophy for the first time this year, and have a great interest in introducing this new incentive as we believe our owners are keen on any form of promotion. We estimate that about 10% of registered horses are participating in sports activities such as races and endurance, but the proportion of horses that are presented at horse shows is much bigger. Every year we organize a couple of educational seminars where we give the latest available information to our owners and breeders and give affirmative lessons regarding the breeding and care of Arabian horses as well as the registration and identification procedures in our country.

We would like to take this opportunity to thank all foreign stud book authorities for their cooperation when we were collecting Export Certificates and other necessary documentation for our first stud book and WAHO approval. We would like to thank the World Arabian Horse Organization itself, for giving us support and for welcoming us to their family. Special thanks go to Katrina Murray who gave us her 24-hour attention and all information we needed in what seemed the matter of minutes, in the whole period of the approval procedure for Croatia. Thank you very much. 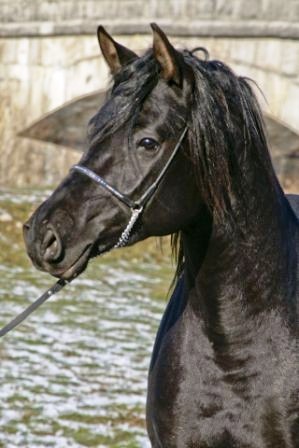 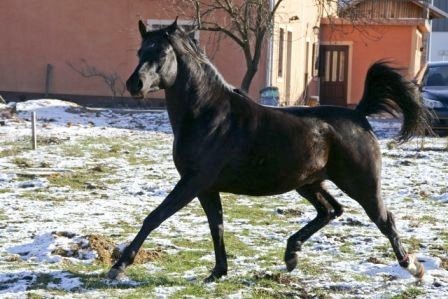 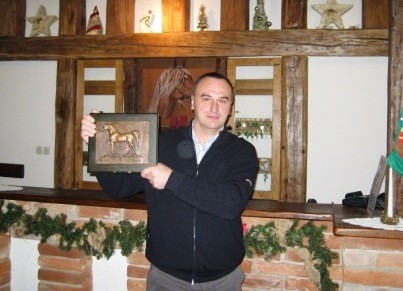 The Croatian Arabian Stud Book Authority has proudly announced their first ever winner of the WAHO Trophy. Since Croatia was fully accepted as a Registering Authority Member of WAHO at the beginning of 2009, they have been looking forward to making this award. They decided to give their first WAHO Trophy on the occasion of their first Festival of Arabian horses, which took place in October 2009 in front of an international panel of judges and enthusiastic audience. 1/3 of the registered Arabians in Croatia took part in this event, and according to the decision of the judges, the best Croatian bred Arabian horse at the show was the attractive young chestnut mare, Enwara B. She was therefore awarded the inaugural Croatian WAHO Trophy, 2009. WAHO congratulates all her connections on this historic ahievement.

Her pedigree is predominantly Russian/Egyptian, being by the Balaton son Problesk (known in Hungary as Abu Shadi) and out of the Babolna-bred mare Enwara B, imported to Croatia from Hungary carrying Megan Enwara in utero. She is by the Russian-bred Magdan out of the Babolna mare 248 Farag II, herself mainly of Egyptian lines with a touch of Polish included. It is hoped that Megan Enwara will, in time, become an important broodmare for Croatia’s increasing Arabian horse population.