REPORT MADE AT THE 2019 WAHO CONFERENCE:

Christina Abu-Dayyeh, Jordan: Mr. President, Member of the Executive Committee, Colleagues. I am happy to be here with you all representing the Royal Jordanian Stud Book Authority.

Over the past three years we have witnessed an increase in the number of foal registrations in Jordan, with the number climbing from 86 foals registered in 2016 to 175 foals registered in 2018.  Our most popular activities in Jordan for Arabian horses are the halter shows and endurance rides, which are both organised by the Royal Jordanian Equestrian Federation.  We do see some Arabians jumping the smaller classes, some in dressage, polo, the police force and displays by the Royal Guard.  As for halter shows, the number of entries in both our national shows and our ECAHO title show is increasing steadily, with entries ranging from 140 to 170 entries per show.

We are happy to report that we are up to date with our stud book, volume 8 is out in print and in .pdf and we are working on creating an online stud book, hoping to have it completed before the end of the year.  Wishing you all a successful Conference, thank you to our hosts, thank you.

REPORT MADE AT 2017 WAHO CONFERENCE:

HH Sharifa Sara Ghazi, Jordan: Good afternoon everyone. In Jordan we have had a slight delay with the release of the next stud book, however, hopefully later on this year the new stud book will be published. We do not have an online edition but it is something that we are looking into, the possibility of creating that. The number of Arabian foals registered in 2015 was 92. In 2016, 55 foals were registered. The number of Arabian horses imported and exported in 2015, 13 horses were imported to Jordan and 11 were exported. In 2016, 7 horses were imported, 10 horses were exported.

The number of breeders and owners of Arabian horses is increasing every year in Jordan. We now have 14 local breeders and owners and the number, as I said, is increasing every year which is very encouraging for everyone in Jordan. The horses also participate across the board in show jumping as well at the junior level, showing the true versatility of the Arab horse. Thank you very much.

In 2011 the Royal Jordanian Stud Book Authority reported 61 registered foals, and recorded 14 exports and 16 imports. There were 2 Shows, one National and one International, and 9 Endurance events in 2011. Artificial Insemination is permitted, Embryo Transfer is not. In 2010 the RJSB reported 70 registered foals, and in 2009 they registered 66 foals.

In 2008 The Royal Jordanian Stud Book Authority reported the publication and distribution of their latest Stud Book Volume 6/7. 60 foals were reported as registered in the year 2008, together with 75 imports. 10 horses were exported in the same year.

Our last published stud book Volume 5 goes up to 1999, Volume 6 is nearly ready, it includes horses up to 2004, and we hope Volume 7 will be out in 2008. The Registering Authority is based at the Royal Jordanian Equestrian Federation.

In 2005 we had approximately 65 foals registered, and 53 in the year 2006, a good number for us. Imports numbered 21 during the past 2 years, exports numbered 52 for the same period, to and from all over the world.

There is a lot more interest and more breeders and we have more activities going on in Jordan. We have approximately 35 active breeding stallions, about 85 active breeding mares, living Arabians probably about 350. We permit Artificial Insemination and the use of Transported Semen both imported and exported. Embryo transfer is permitted. We don’t use microchipping.

Our main events are halter classes, in-hand Shows, of which we have 3 a year now. We have a National Championship Show, a smaller National show, and the Middle East Championships. Endurance is extremely popular, we have 6 actual events but these incorporate several different distances so we have a lot of endurance rides a year, including an FEI CI 120 in Wadi Rum which is very popular. Arabian horses are also used for dressage, show jumping, tent pegging and polo. They are also used by the mounted police. Our endurance team participated in Aachen and in the Asian Games in 2006, successfully. Almost all the registered Arab horses in Jordan that are of an age to participate do participate in something, some of them do many different disciplines.

The charming 16 year old mare Areej is the well-deserved recipient of Jordan’s 2011 WAHO Trophy. The presentation was made during the 2011 Middle East Championships Show in Amman.

According to the citation which explains the reason that Areej won this prestigious award, she has been the most constantly patient and loving of the Arabian horses in the Growing Together project. This initiative started by the Princess Alia Foundation in Amman offers equine therapy for children on the autistic spectrum and for others with special needs. Areej, who is of predominantly ‘old Jordanian’ bloodlines with added Spanish lines, is never impatient or grumpy with the children, she has done so much not only for them and their families but also for the Arabian breed in general. Despite no special training herself she has taken to her new responsibilities with the generosity of spirit and inherent kindness that should be the hallmark of the true Arabian mare, with amazing results. She is not only helping the children, but also spreading the word of how horses can be great healers, and it is for this role as a superb representative of all that is best about the Arabian breed that she has been awarded the WAHO Trophy.

The 2009 WAHO Trophy for Jordan has been awarded to the lovely mare Dalia, bred and owned by Mr. Said Khair, one of Jordan’s most important private breeders whose stud farm has been in existence for very many years. Dalia was awarded the Trophy because both she and her offspring have been consistently successful in the show ring, she is an excellent broodmare and an asset to the breeding of Arabian horses in Jordan. Her grand-sires and grand-dams which have a blend of international bloodlines were all imported to Jordan from the UK in the 1980s, and she is the result of 2 generations of Mr. Said Khair’s breeding programme.

The Trophy was presented by HRH Princess Alia Al Hussein Al Saleh in a well received public ceremony during the Middle East Championships International Arabian Show which took place in Amman in October 2009.

Al Hamaama, now aged 18, was selected as this year’s WAHO Trophy winner in recognition of her outstanding contribution to the breed in Jordan as well as to Jordan’s reputation abroad.

Al Hamaama represents the Jordanian and quite rare strain of Umm Argub. Her dam line traces to Sabal II who was a brilliant racehorse over all distances, while her sire Golden Decimus (GB) was a very successful endurance competitor as well as sire.

Victorious in the show ring in her own right, Al Hamaama won the Reserve Best Head title at the Mediterranean & Arab Countries Championships in Menton, France, in the 1990’s. She and her daughter Al Yamaamah (by Abakan) have frequently shared the winner and reserve placing in that category at the Jordan Nationals as well as at the Middle East Championships in Amman.

Al Hamaama’s daughters have proved to be very important broodmares in their own right at her maternal Stud, and her descendants also grace the Royal Stables of Bahrain (daughter Al Hasna by Abakan) and the stud of HH Sheikh Sultan Bin Zayed Al Nahayan in Abu Dhabi (great grand-daughter, Hilwah by Hlayyil Ramadan).

This year her grand-daughter Yusra won all four categories for Highest Points mentioned above at the Middle East Championships and had the 6th highest points of the whole show, while her great grand-daughter Hoor won the title of Filly Foal Champion and Best Female Head, with her maternal aunt Al Yamaamah as Reserve. (MaShaAllah to all of the above).

Very much treasured at the Royal Jordanian State Stud, it is clear from all the above that Al Hamaama truly earned her WAHO Trophy and Princess Alia Al Hussein Al Saleh, who personally presented the award, felt that Al Hamaama seemed pleased as she accepted it with – as you can see in the photograph – her customary aplomb and dignity!

The Royal Jordanian Equestrian Federation has selected the outstanding World Champion stallion Hlayyil Ramadan as their winner of the 2006 WAHO Trophy for Jordan.

A happy blend of Egyptian and rare old Jordanian lines, with several generations on his female line all bred at the Royal Jordanian State Stud, Hlayyil Ramadan has represented Jordan at the 2002 and 2004 World Championships, he was 2004 European Champion Stallion and is a multi champion stallion in the Middle East and in Europe. Perhaps more importantly, he has won the prestigious Sire Produce award in Jordan and is the sire of quality winning offspring, and his daughters are now themselves proving to be excellent broodmares.

His connections decided to show him in a natural and unstressed way at the 2006 Middle East Championships Show in Amman, thereby making an important statement regarding modern show trends. 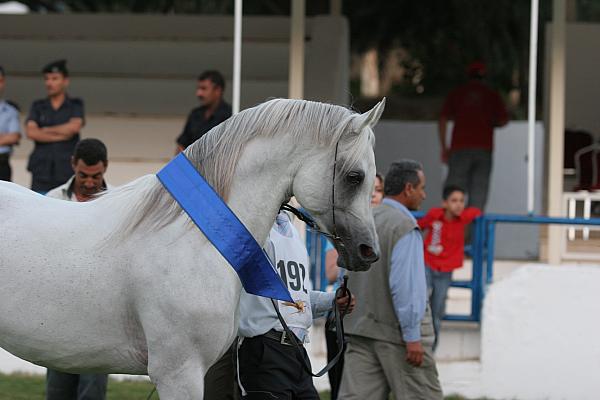