The Swedish Arabian Horse Registry has reported that in 2017, 88 foals were registered. There are 152 broodmares and 51 stallions used for breeding. 41 horses were exported and 47 horses were imported.

The Swedish Arab Horse Registry has provided the following information. In 2016, 123 foals were registered. There were 43 horses exported and 44 horses imported during 2016. In 2017, there were 88 foals registered. 41 horses were exported and 47 were imported.  Showing, racing and endurance all remain popular activities in Sweden.

REPORT MADE AT 2014 WAHO CONFERENCE:

The Arabian horse industry in Sweden is decreasing and the main reason is the low prices for the horses. That also has the consequence that the large breeders are decreasing, and the typical breeder in Sweden today produces on average 3 to 4 foals every year. That means that the activities are also down. This year we have 5 shows, some of those are International, we have 5 days of racing, and there are also a lot of sports activities throughout the country.

Last year we registered 181 foals, with 39 exports and 44 imports. We have a total of 12,000 horses in the registry and I think our main activity in WAHO must be to promote this fantastic horse in the market, so that more people want to buy and own a purebred Arabian. A lot of countries have a low price level and our challenge must be to increase this. Thank you very much.

My name is Håkan Mattson, I am the President of the Swedish Arabian Horse Association.

The activities for Arabian horses are growing in Sweden. Both showing and the different sports activities are growing. We also handle other activities, such as seminars and training clinics, and we look forward to further interest and growth in 2009 and 2010. Thank you.

The current stud book is Volume II-10, to 1999. However, we now publish the relevant information on the website www.sahf.se (go to “ARAB Stambok” on the left side).

There are estimated to be more than 7,000 living Arabian horses in Sweden, with 300 active broodmares and 85 active breeding stallions. 347 foals and older horses were registered during 2008. All are DNA-typed and parent verified. During 2008, 44 horses were exported and 35 imported.

The use of Artificial Insemination and transported semen are permitted. Embryo transfer is not permitted.

Showing, racing and endurance are the most popular activities for Arabian horses in Sweden. Arabian horses are also popular for Western Riding and pleasure riding. Our horses have competed very well on an international level in all these activities. We have 3 to 5 shows each year, and we have national competitions in ridden classes, endurance riding, racing and in western riding classes. From those we nominate the best Arabian horse of the year in each discipline.

The Swedish Arab Horse Society and ARAB (the Swedish Registry) are proud to announce that the stallion Diesel was awarded their WAHO Trophy 2009. The Trophy was presented during the Swedish National Show in August.

Diesel was unanimously picked as the winner because he is the ultimate and successful sporthorse in multiple disciplines – dressage, jumping, pole bending, endurance, 3-day-event, speed, hunting, as well as in show.

Diesel and Josefin Ågren on their way to one of their 2 gold medals at the 2008 ECAHO European Championships for Arabian Sporthorses
(photo Copyright www.ck24.at)

In 2008 at the European Championships for Sporthorses in Austria he was the first Swedish horse taking two gold-medals the same year, in both Jumping & Cross country.

Through the years until today he has more than fifty (50) places in all disciplines, and is still going strong. Actually, right at the time for his nomination in July 2009 he was sold to a new owner and the daughter Julia is now training him in their first season together.

He is also known for his calm and friendly character and is a real gentleman. For many years he has looked after foals and youngsters to educate them in good manners. Not to forget his numerous offspring now entering the stage with success.

Diesel comes from well known Polish bloodlines imported to Sweden in earlier days and he has them close up in his pedigree which is unusual today. With his qualifications and personality he is a worthy ambassador and winner of Sweden’s 2009 WAHO Trophy, and we think this is not the last time we will hear about him or his offspring’s achievements.

The Swedish Arab Horse Society and ARAB (the Swedish Registry) are proud to announce that the mare Maskarada, bred and owned by Blommeröd Arabian Stud, was awarded the WAHO Trophy 2008. The Trophy was presented during the Swedish National Show in August this year.

Maskarada is a daughter by the European Reserve Champion Stallion Partner and out of the Swedish National Champion Mare Marcessa (by Madar). She traces back on her dam’s side to the foundation mare Sakla (by Amurath Sahib) who was imported to Sweden 1962 from Poland and brought to Blommeröd in 1967.

She has been an outstanding producer of wonderful mares such as:

From this group of Maskarada’s best daughters, Margotka is the most important to date, as she has left the most precious offspring for Blommeröd and Sweden to be proud of. Her daughters Magora and Marylla, both by Gazal Al Shaqab, have been oustandingly successful at many major and international shows for their new owners in the Middle East. So far, Magora has collected the most show titles and became the 2007/2008 winner of the Dubai Gold Cup for Senior Female Champion at the Dubai International Show.

This makes Maskarada the ‘living link’ between the past and the future to carry on this valuable dam line in Arabian horse breeding in Sweden and elsewhere. Mares such as this well deserve to win the WAHO Trophy in celebration of their strong contributions to the Arabian breed.

The Swedish Arab Horse Society and ARAB (the Swedish Registry) are pleased to announce their winner of the 2007 WAHO Trophy. The Trophy was presented during Blommeröd Raceday September 15th.

El Wodkine is bred, owned and trained by Klintes Araber, P-O & Anette Scherling in Vetlanda. In spite of his years (12 yrs now), he is still racing on the elite level with success.

El Wodkine is the greatest racer ever in Swedish Arabian Horse racing-history. He has made 62 starts with the excellent results of 27 wins, 14 second places and 6 third places, and has earned approximately 100,000 euros in prize-money.

In Scandinavia he has 8 racecourse-records, and has twice been awarde the title of National Racing Champion in Sweden (2000 & 2006) and once in Denmark (2006). During the years 2003-2004 he also competed in Dubai, in the UAE, where he achieved one victory and 5 places. He is a very worthy winner of Sweden’s 2007 WAHO Trophy.

The bay stallion Pamir has been awarded Sweden’s 2006 WAHO Trophy in recognition of his superb lifetime achievements as a breeding stallion. Evaluated in 1987 as a breeding Stallion First Class, Pamir is the sire of many very high class racing horses. Many of these offspring were full brothers and sisters that he got with his lifetime “wife” Djamiljah. (Djamiljah is by Prokaznik out of Indian Shade/Indian King. She is the dam of 21 foals – the last one named Black Jack.)

Pamir with his owner Ingrid Kindh and handler Magnus Tingshagen.
Photos are the Copyright of Martin Larsson, Sweden

Many of these offsprings are now put into breeding programmes themselves and keep delivering offspring of very high quality.

Pamir with his handler Magnus Tingshagen
Photos are the Copyright of Martin Larsson, Sweden

The WAHO Trophy for 2005 was proudly awarded to the best Swedish-bred Arabian with the highest points given at the Swedish Nationals in 2005 (in halter). Britt Svanberg and Jorgen Olsen also bred and own her dam, Estetica, a young mare born in 2000 by L.M. Limaal, and it is fascinating to note the connection that JB Psynderella is the great-great-great granddaughter of Poland’s 2005 WAHO Trophy winner, Etruria. 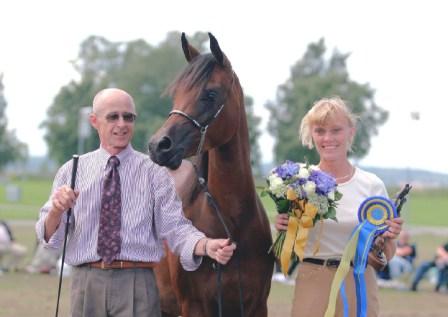 JB Psynderella with her owner/breeders, Britt Svanberg and Jorgen Olsen.