The Romanian Arabian Stud Book has provided the following information.  In 2016, 41 Arabian foals were registered, with additional registrations pending until completion of parent verification.  28 horses were imported in 2017. There were 5 races for Arabian horses and 10 endurance competitions.

The Autoritate Hipica Nationala reports that 35 foals were registered in 2008, with 70 broodmares and 13 stallions currently active. All foals are parent verified by DNA, and are microchipped. Passports will be issued from 2009. There were no imports or exports in 2008. The use of Artificial Insemination and Embryo Transfer is permitted. There are estimated to be 400 living Arabians in Romania. Showing is a popular activity, with approximately 30 shows or classes each year. Endurance riding is growing in popularity, with some 30 rides annually.

REPORT MADE AT THE 2007 WAHO CONFERENCE:

The National Horse Authority of Romania is a new strong institution now in charge of the Romanian Arabian Stud Book.

In Romania we have about 500 purebred Arabian horses altogether, both State owned and privately owned. Our latest Stud Book was ready in April 2007, available in printed form and on a CD as well. The number of active breeding stallions is about 20, but we have 120 breeding mares. In 2006 the number of foals registered was 40, and every year it remains about the same number. There were no imports or exports in 2006. We have used blood-typing in the past, but now we are changing to DNA this year, we will be using a laboratory recognized by ISAG. All horses from the National Studs are microchipped, and this activity continues and will extend to the horses of the private breeders. We don’t yet use Artificial Insemination, nor Transported Semen nor Embryo transfer. Maybe we will do so in the future.

For the past 2 years, the Romanian Equestrian Federation has promoted and run endurance riding events, and every year about 50 horses take part. Also many horses are shown at Agricultural Exhibitions which take place all over Romania. We have a magazine on horses, and our Authority has several pages in this and every month we write articles about horses including Arabians.

In 2007, Romania registered 50 foals. There were no reported imports or exports in this year.

The National Agency for Breeding & Reproduction in Zootechny has awarded their 2009 WAHO Trophy to the oustanding young privately-bred stallion, Samir.

Sired by the imported Polish stallion, Cygaj (1991, Pamir/Cygaretka, bred by Michalow Stud) and out of the Mangalia-bred mare 756 Ibn Galal 7 (Ibn Galal I-6 / 647 Nedjari VII-2), his pedigree blends Polish and Egyptian lines with some of the oldest bloodlines from both Romania and Hungary.

Samir is especially noted for his excellent movement and very good character and temperament, and it was for these reasons that he was awarded the 2009 WAHO Trophy. It is hoped he will be an important addition to the breeding stallions in Romania in the future.

The National Horse Authority of Romania is pleased to announce that the 10-year old chestnut stallion GHID has been awarded their 2008 WAHO Trophy. This attractive stallion has particularly good movement, and an excellent character. His damline, one of the oldest and most important at Mangalia Stud, traces to the desert-bred Obayah mare, 212 Delilah, born in 1893, who was imported to Babolna Stud in Hungary in 1902. Her daughter 4 Hadban I-7, born 1907, was imported from Hungary to Mangalia Stud in Romania in 1919 where she left many descendants.

Ghid will stand at stud at Mangalia Stud Farm for the 2009 breeding season. He is considered the best son, until now, of the imported Polish stallion, Cygaj. So far Ghid has covered some private mares and his foals have inherited his best qualities.

The Autoritate Hipica Nationala of Romania are pleased to announce that the stallion Cocor, bred and owned by the State Stud at Mangalia, has been awarded their 2006 WAHO Trophy. This stallion is a champion in Romania and has proved to be an excellent and prepotent sire.

Altintepe has been the chief sire at Mangalia Stud since 1999, with 33 progeny recorded to date. A substantial and well conformed stallion who fulfills his role as a chief sire with excellent results in his foals. 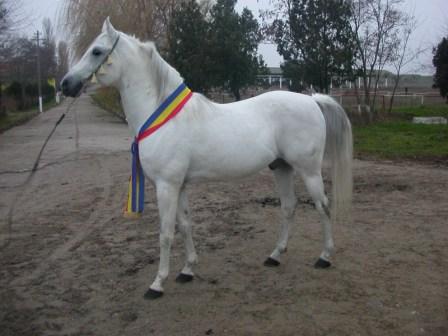 The WAHO Trophy was presented to Mr. Constantin Ancuta, Manager of Mangalia Stud Farm and breeder of the stallion, together with Dipl. Eng. Anton Ferencz, representing the owner (National Forests – Administration – Romsilva). They are very proud that Altintepe, who is the product of many generations of breeding at Mangalia Stud Farm, was honoured with this well-deserved award. 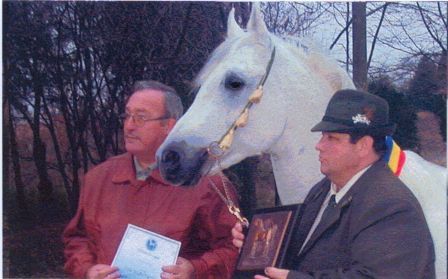