FNARC have provided the following information. In 2017, 454 foals were registered. There were 38 horses exported and 8 horses imported. There were 4 shows, 378 races and 15 endurance competitions. In 2018, 452 foals were registered. 37 horses were exported and 10 horses were imported. The number of competitions remained the same.

In December 2016, we issued the volume 13 of Tunisian Stud Book which covers the period from 2011 to 2014. Our Stud Book is online through our website which includes all essential information about horse pedigrees and events like the sale of horses and organization of shows. The web site is at the address www.fnarc.nat.tn.  At the end of this year, 2017, a supplement covering births 2015 will be published.

All foals are parentage verified by DNA Typing and also microchipped; we issue a passport for horses after registration. Our laboratory is an institutional member of ISAG and participates to the comparison tests, classed RANK 1.  Artificial insemination with frozen and fresh semen is used in both national and private studs. Embryo transfer is allowed but not used in Tunisia. We accept the post mortem use of semen.

The principal activities for purebred Arabian horses is racing, we have 365 races per year. Endurance is the second activity for Arabian horses, we have 12 competitions per year of which two are international (FEI). Also 4 shows were organized.  Finally, we thank Miss Katrina Murray for her good collaboration.   Thank you for your attention.

Dr. Faten Lasfar, Tunisia: Mr. President, members of the Executive Committee, delegates, ladies and gentlemen. I am Dr. Faten Lasfar, the Stud Book Manager for Tunisia, my colleague is Dr. Belgacem Ben Aoun, responsible for Arabian horse production in Tunisia. F.N.A.R.C. works together with the National Studs, under the authority of the Ministry of Agriculture. I would like to take this opportunity to thank the Qatar Racing and Equestrian Club for hosting the WAHO Conference 2014, for their hospitality and for their warm welcome.

In November 2014 we issued volume 12 of Tunisian Stud Book, which covers the period from 2007 to 2010. Our stud book is online at our FNARC website which includes all essential information about horse pedigrees, as well as events like the sale of horses and organization of shows. The web site is under the address www.fnarc.nat.tn. At the end of this year a supplement covering births 2011 and 2012 will be edited.

Artificial insemination with frozen and fresh semen is used in both national and private studs, under the rules of WAHO. Embryo transfer is allowed but not yet used in Tunisia. We accept the post mortem use of semen. The principal activities for purebred Arabian horses is racing, we have 365 races per year. Endurance is the second equestrian activity for Arabian horses, we have 12 competitions per year of which 2 are at the international FEI level. Also FNARC organized 4 shows for Arabian horses. Thank you very much for your attention.

Mr. Jilani Msaada, Tunisia: Good afternoon. We would like to thank the Qatar Racing and Equestrian Club for hosting this excellent Conference and for their hospitality. We are the delegates from Tunisia, we represent the Fondation Nationale D’Amelioration De La Race Chevaline (FNARC). My colleague is the General Manager, Dr. Mohammed Habib Ezzaouia, and my name is Jilani Msaada, I am the Deputy Director of the FNARC.

In Tunisia we have a long history and tradition in breeding Arabian horses and the registration of these horses started in 1866. The number of living Arabian horses in Tunisia is estimated at 4,000 and in 2010 we registered 390 foals. The number of broodmares is 710 and there are 32 active breeding stallions. The number of breeders in Tunisia is over 295. All foals are parentage verified by DNA, and are also microchipped. We allow the use of artificial insemination, since 2002, and it is used at some of the National Studs as well as in private studfarms, using both domestic and imported semen. We do not allow embryo transfer.

As you know, the distinguishing features of Tunisian Arabian horse makes them particularly suited for racing and endurance competitions, and there is a huge demand for these horses. So in the two years 2009 and 2010 more than 260 horses were exported to the Gulf Area and to other countries. 4 horses were imported, all from France. Thank you very much.

My name is Khadija Driss, I am representing the Tunisian National Studs and I am in charge of the Arabian horse production after an interesting experience as the Registrar for several years. My co-delegate is Mr. Dhaou Maiz, President of the Jockey Club of Tunis.

Arabian horse breeding has considerably increased during the last years in Tunisia, because of the encouragement of our Government and the personal efforts of some new breeders. Our last published stud book Volume is number 11, including the years 2003-2006. During 2008 we registered 396 foals, 72 exported horses and 2 imported mares. We estimate there are 2,500 living Arabian horses in Tunisia, some of them are used for breeding, with 800 broodmares and 50 stallions. All these horses are DNA-typed. Microchipping has been mandatory for Arabian horses since 2007 for all foals, dams, and breeding stallions, and even for yearlings before racing so we have microchipped horses since the 2004 births. Traceability is strictly applied between the act of microchipping and the application of the sticker containing the microchip code ISO on the passport of the horse. Artificial Insemination with frozen and fresh semen methods is widely used in the National and private studs. Embryo Transfer is allowed but has not yet been used in Tunisia.

The most popular activity for Arabian horses in our country since the beginning of the 20th century, is racing. We have 350 races per year and 80% of them are for Arabian horses. The Jockey Club of Tunis is in charge of this. 15 years ago, endurance became the second use of Arabian horses, with 12 meetings per year, 2 of which are Internationals. These meetings are organized by the Equestrian Federation. The same horses used in racing are also judged for show. Mares and 2 year olds can be presented. Arabian horses are managed by the National Stud which is an Organization under the control of the Government. Control of procedures, printing and publishing of the official documents is under the charge of our institution. The Tunisian Government is encouraging breeders to invest in horse-breeding and particularly in Arabian horses. More than 150 active breeders are registered on our database with 400 breeding mares between them. This number is increasing by about 10% each year.

The WAHO Trophy has been awarded once in 2006, to the winner of the most important Tunisian racing prize, but we are now thinking about another way to select the best horse for the WAHO Trophy.

FNARC, the National Foundation for Horse Breeding and Improvement, manages the Arabian Stud Books of Tunisia. Arabian horse breeding in Tunisia started over a century ago and up until now 5,252 Arabian horses have been registered in our stud books.

The Arabian horses in Tunisia are bred mostly for racing, we have 253 races each year. Worth mentioning in this regard is that many of the Arabians that have won races abroad in countries such as the United Arab Emirates are from Tunisian bloodlines. In 2006 we organized 10 endurance competitions with good participation of Tunisian Arabians. 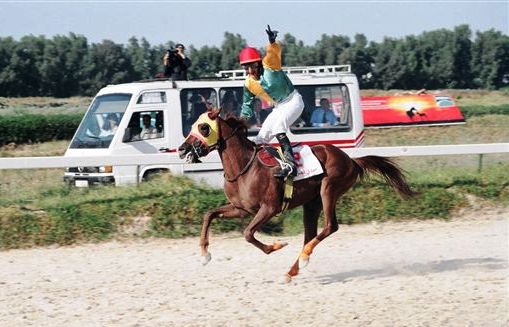