The Slovenian Arabian Stud Book Authority has provided the following information. In 2018, 30 foals were registered, 8 horses were exported and 4 horses were imported. There was 1 Arabian horse show and 4 endurance competitions.

The Slovenian Arabian Stud Book Authority reports that 20 foals were registered in 2008, with 60 broodmares and 14 breeding stallions active. The living Arabian population in the country is now estimated at 275. 4 horses were imported in 2008, from Austria, The Netherlands, and The Czech Republic, and 1 stallion was sent on temporary lease to Croatia for breeding. There have been no other changes to the registration procedures or rules since those previously reported.

In 2007, Slovenia registered 21 foals. 3 horses were exported, and 4 were imported. Although these dissimilarities is considerable, we estimate that in the future we may expect moderate growth of the numbers of registered foals and also of the total numbers of horses. Our expectations are based on the fact that there are more and more ambitious breeders who are improving their breeding by the importation of quality breeding stock and by better management.

According to our breeding rules, parent verification of foals is mandatory prior to first registration. DNA testing has been in use since 2004. For the purpose of identification, Markings Identification Documents are issued to the registered foals. For the time being other methods of marking such as branding, tattooing, or micro-chipping for this purpose are not in use. We allow artificial insemination, and also ovum and embryo transfer, but only one foal can be registered per donor mare.

According to the fact that Arab breeding has only started in Slovenia some fifteen years ago, that numbers of the Arab horses are still very small and that only recently some breeders have become more ambitious, it can be understood that numbers of activities organised are small. In the last two years the Association of Slovenian Arab Breeders has organised shows in halter class for the purpose of selection and promotion of the breed. Seminars in training and presenting of the horses were also organised. These activities are proving to be very important not only as the means of selection and promotion, but even far more as the means of education of the breeders. Some Arabian horses are now taking part in dressage and endurance competitions organized by the Slovenian Equestrian Association. 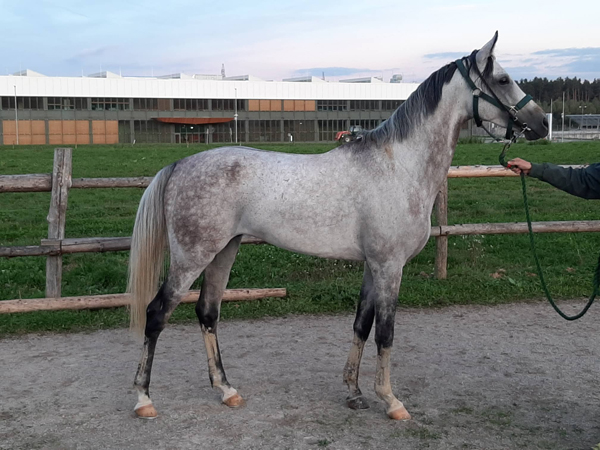 Slovenia is pleased to announce the winner of their 2020 WAHO Trophy.
When in 2014 Fatima S delivered a long legged colt by the ‘Straight Russian’ stallion Bukefal (Almonito/Moriachka), nobody dared to predict that the colt will one day be the fastest Arabian in Slovenia.

His dam Fatima S is by the pure Crabbet WAHO Trophy winner Golden Crown (Naxif/Luanda) and out 9 Farag II, the beautiful and elegant queen of Babolna.

Fakir’s owner will continue racing the talented stallion in 2020 in the international races. Fakir Ibn Bukefal is also a breeding stallion, that will surely contribute to the Slovenian breeding in the future. 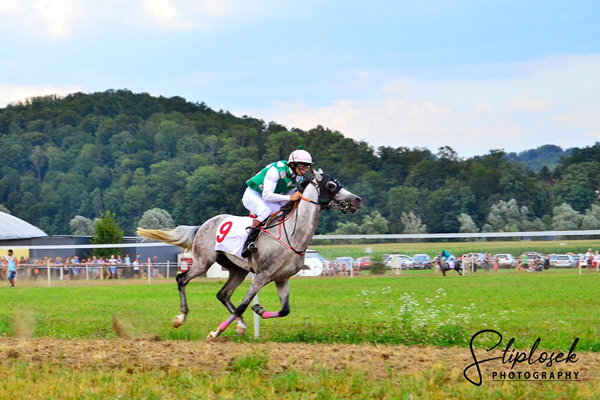 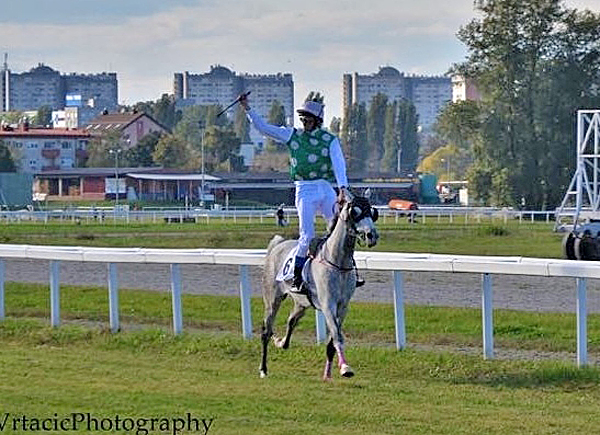 The 2017 WAHO Trophy winner for Slovenia has been announced. The Trophy has been awarded to the magnificent breeding stallion, Jamil Ibn Shaklan. 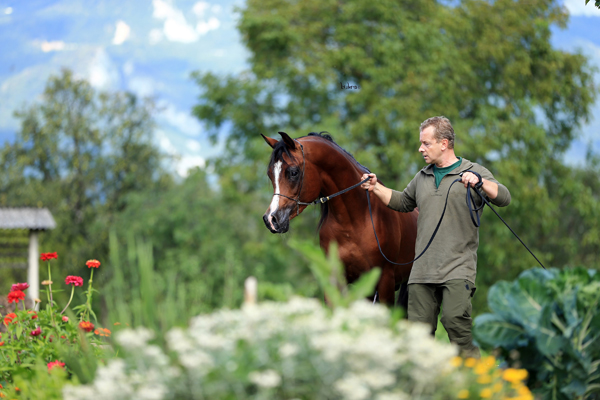 In 2016 he participated very successfully in some International Shows: 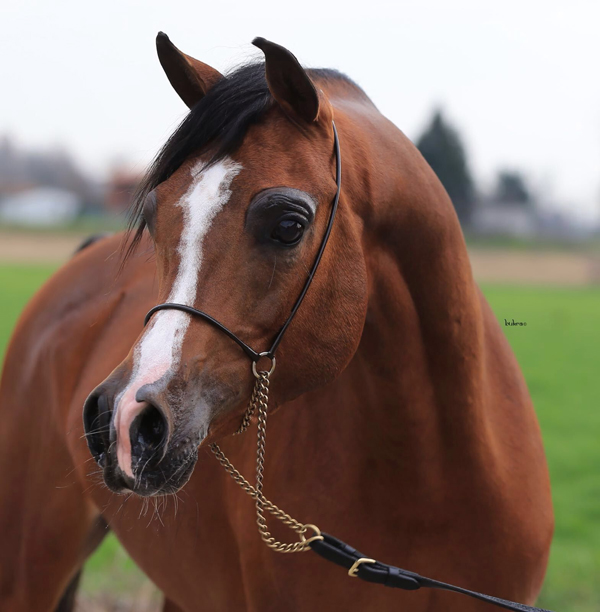 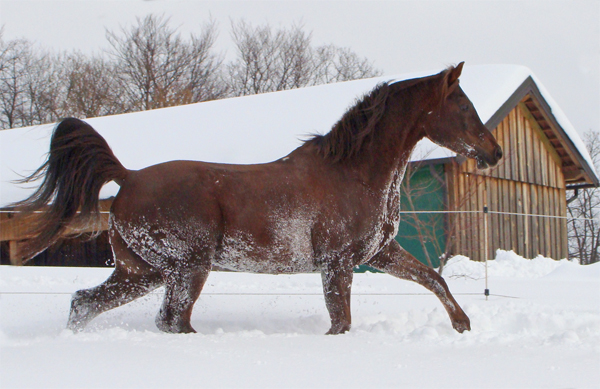 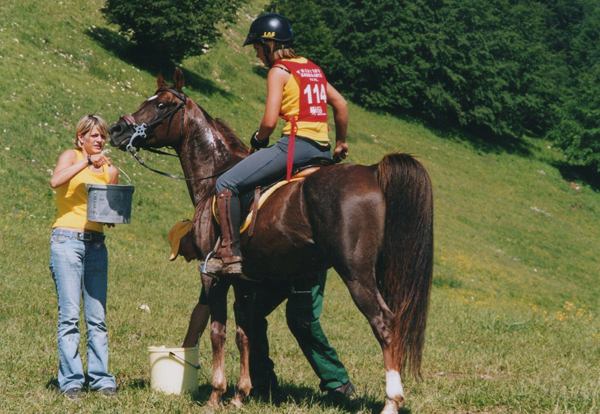 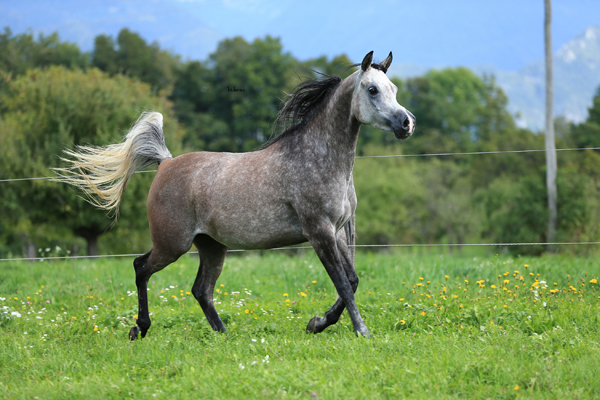 The eight year old grey mare El Zilal Masriyah was awarded Slovenia’s 2014 WAHO Trophy. She is an excellent mare of straight Egyptian bloodlines. In 2013 she participated in the International Egyptian Event at Travagliato, Italy. In the class for adult mares of pure Egyptian origin she took second place and went on to take the title of Silver Champion Mare. This was a really excellent result for a mare that is now flying the Slovenian flag as an ambassador for her country’s Arabian breeding programme in international competition, and this is why she was selected for the WAHO Trophy award. 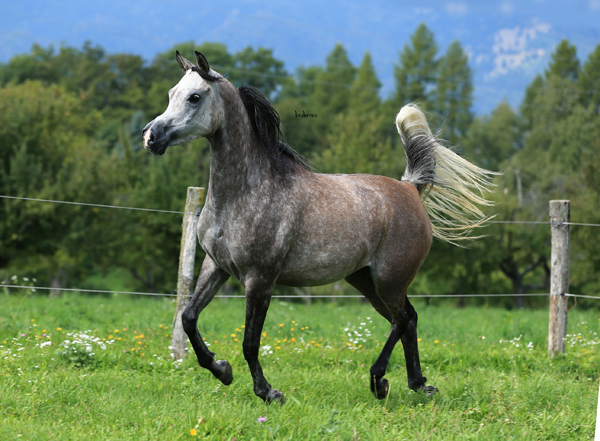 Pasion P has been awarded Slovenia’s 2013 WAHO Trophy. This attractive gelding is the first Slovenian purebred Arabian horse which successfully competes in endurance. In the year 2011 he won the Slovenian National Championships with his young rider, she was just 16 years old at the time. This proves not only his athletic ability and soundness, but also shows that he has a really excellent calm temperament.

Pasion P and his owner, Lila Gros, at an endurance ride during the vet check

Pasion P enjoying the beautiful Slovenian scenery during a ride

The 2012 WAHO Trophy winner for Slovenia has been proudly announced.

Lawai is the full brother of the 2011 WAHO Trophy winner for Slovenia, Lawos. He participated, like his brother, at the International Show in Hungary in August 2009, coming second in his category in the keen competition for the Balaton Cup. This lovely young stallion is of predominantly Russian and Polish bloodlines, he has continued to develop well since that show success and it is hoped he will have a successful future career both in the show-ring and as a sire.

The 2011 WAHO Trophy winner for Slovenia has been proudly announced.

Lawos is the first horse born and first registered in Slovenia that has participated in international shows. He took part in the International Show in Hungary in August 2009, winning the competition for the Balaton Cup. This lovely young stallion is of predominantly Russian and Polish bloodlines, and hopefully has a bright future ahead of him both at international shows and as a sire at home in Slovenia.

Slovenia is pleased to announce their latest WAHO Trophy winner.

El Dahra is the first domestically bred Slovenian stallion used for breeding in the country. His sire, the British-bred Golden Crown (1978-2009) who was in fact imported to Slovenia from Iraq, is himself a past WAHO Trophy winner. His dam Amun Swadeschi was imported from Germany and has become a very important broodmare in the country.

El Dahra’s interesting and truly international pedigree combines old English bloodlines with Egyptian, Marbach, early Spanish and domestic American lines. He has been awarded the 2010 WAHO Trophy for Slovenia in recognition of the fact that one of his sons is already being used as a sire, and two of his daughters are now successful broodmares.

The Slovenian Stud Book Authority decided to award the mare Askaya with their 2009 WAHO Trophy.

She is one of the first purebred Arabian horses born and registered in Slovenia. She has proved to be one of the best broodmares in Slovenian breeding. She has delivered seven foals so far, six colts and one filly which is now a broodmare in her own right, with several offspring of her own.

The Slovenian Stud Book Authority has decided to award the mare PIRUNA with their 2008 WAHO Trophy.

Though this mare was not born in Slovenia, being an import from Germany and registered in the first Slovenian Arabian Stud Book, her four Slovenian-born and registered foals are of such excellent quality that the Slovenian SBA believe she has more than proved her breeding potential as a mare of signifance to the breed in their country. They expect her contribution to the success of her owner’s stud farm and her ability to improve the quality of the small Slovenian population of Arabian horses will be substantial. Therefore, all these facts were considered to qualify this mare as the Slovenian WAHO Trophy winner for 2008. Last but not least, it also means a recognition of the merits of her owner, Mr. Gregor Pintar, who is undoubtedly one of Slovenia’s most dedicated and competent breeders.

The Slovenian Arabian Stud Book is pleased to announce that the grey mare Amun Swadeschi has been awarded their 2007 WAHO Trophy.

This mare was one of the first purebred Arabian broodmares in Slovenia and as such, has become one of the founders of Slovenian Arabian breeding. So far she has produced 10 registered foals, 6 colts and 4 fillies, during the period 1989-2007. Three of her four sons have already proven themselves as breeding stallions, and one of her daughters is now herself a broodmare, confirming the breeding value of Amun Swadeschi.

Although not born in Slovenia, she is surely the mare who has strongly influenced Slovenian Arabian breeding by her type and excellent characteristics. We feel that all these facts qualify this mare as the Slovenian WAHO Trophy winner in 2007.

The Slovenian Arabian Stud Book Authority is pleased to announce that the 29-year old stallion Golden Crown, owned by Joze Zver, Brezovica, Slovenia has been awarded the 2006 WAHO Trophy for Slovenia.

Despite the fact that this grand old stallion was first registered in Great Britain and not in Slovenia, which is considered a first criterion for the WAHO Trophy, we decided to make a one-off exception and make the award to him because of the fact that he was the first purebred Arab stallion used for breeding in Slovenia.

Golden Crown has had an interesting life. Having sired one foal in England, at the age of 5 he was exported from Britain to Iraq, where he was registered in the WAHO accepted Iraq stud book Volume 1. He had no purebred offspring in Iraq, and was acquired there by his owner, who had been working in that country, and brought back to Slovenia in 1988.

Since his breeding career started in Slovenia, he has produced thirteen fillies and seven colts registered so far. Of these, seven mares and two stallions are themselves already being used for breeding, thus strongly influencing the relatively small population of Arab horses in Slovenia.

The offspring of Golden Crown all inherit his best characteristics, of which his type is most outstanding without fail. This stallion’s contribution to the Arabians of Slovenia has been exceptional and he more than deserves the 2006 WAHO Trophy.

Slovenia is one of the newest Members of WAHO, with a relatively small number of Arabian horses at present, although the numbers are growing each year. In 2005 the Slovenian Arabian Breeders Association organised their first National Show for Arab horses. This pioneering show took place in Ljubljana on 6th of September 2005. A total of 32 horses of all categories – 11 males and 22 females were presented to the judges in front of a good crowd of spectators. The Breeders Association had decided in advance that the 2005 WAHO Trophy for Slovenia would be awarded to the best horse of this show, regardless of the category. The 2005 WAHO Trophy winner is therefore the ‘Best in Show’, being the lovely chestnut filly Pirueta-P, owned and bred by Gregor Pintar, one of the most enthusiastic members of the young Slovenian Arab Breeders Association. 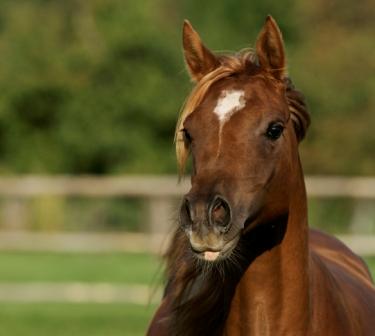 This harmonious and good moving filly is of truly international bloodlines. Her dam is the German bred mare Piruna who was imported to Slovenia in 2002, by the Polish stallion Piruet (Probat / Pieczec) out of the Canadian mare, Into My Dream (Executive Class / Precious Me). Pirueta-P’s sire Piligrim, who was born in The Netherlands, is of Russian bloodlines (Balaton / Popova). 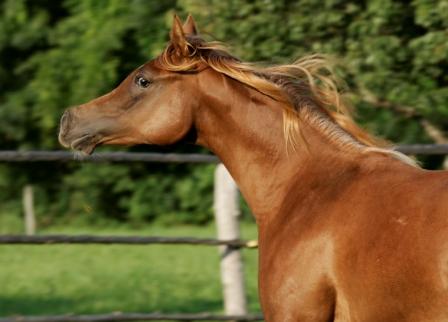