The Finnish Horse Breeding Association has provided the following information. In 2017, 3 foals were registered and 6 horses were imported. There was 1 Arabian show and 12 endurance competitions.

I am Ilse Ackermann, the official Finnish representative. In Finland, breeding Arabians is a small-scale activity: there are only a few larger breeders in the country. Annually, about 10 to 20 foals are born, with about 20 stallions available for breeding. Some foreign stallions have also been leased to Finland, and Artificial Insemination has also been used in Finnish Arabian horse breeding. Finnish-bred stallions have been used for breeding on a larger scale only recently, as there hasn’t been much supply available in the past.

In 2007, 17 Arabians were imported to Finland, with 14 Arabians exported. Currently, there are about 570 purebred Arabians in Finland.

The official Registry, as required by the law, in Finland is Suomen Hippos. Hippos and the Finnish Arab Horse Society Registrar, Tuija Sipilä, cooperate together with the registrations, as Hippos needs the help of FAHS for publishing the Finnish Arabian stud book, among other things. Hippos also have certain pedigree requirements for their own stud book and FAHS do their best to influence this state of affairs so that the views of WAHO could be followed as closely as possible. Participation in the Hippos Stud Book is voluntary. FAHS registers and enters all purebred Arabians into its stud book as required by WAHO.

The winner of the WAHO Trophy chosen by FAHS in 2008 is the Arabian stallion Dali, with excellent results in endurance. Dali has previously also competed in equestrianism and show jumping, but currently he is trained only for endurance under his rider, Joona Mickelsson. The pair has achieved a number of results in International endurance riding competitions and they are currently on place 22 in the FEI ranking list for endurance.

FAHS have also annually arranged one show with ECAHO classification and also run workshops on show training and handling. The 2008 show was an International ECAHO C show and it was held in Lahti in northern Finland. 40 horses were entered in the show with international participants from Sweden. Additionally, small shows with classes for purebred Arabians are also arranged in Finland. Arabians can also be entered into shows arranged by Suomen Hippos, provided the registration requirements of Hippos are met.

The latest stud book published by FAHS is Volume 4. Volume 5 will be published somewhat late in 2009, this volume will include horses registered in 2002-2007. That concludes the report from Finland, thank you very much for your attention.

The Finnish Arabian Horse Society is responsible for compiling the Stud Books and annual supplements. The official Registry is with Suomen Hippos. Currently the registrations are computerized and, due to the low number of horses, the registers are up to date.

There are 477 registered Arabians in Finland. Most of the Arabian horses are owned by individual persons for recreational purposes. We use Arabian horses in dressage, showjumping, and many riding events including eventing and of course endurance. Our Arabian horses are also use for pleasure riding through snow, ice, forests and beautiful summer nature.

In 2006 a total of 17 foals were registered, we had no exports that year but 9 purebred Arabians were imported. We use both blood-typing and DNA typing. Micro-chipping is voluntary. The use of Artificial Insemination and Embryo transfer are both allowed. The Finnish Arab Horse Society holds one major show every year with about 50 entries in each show. Arabian horses have had success in both endurance and eventing in Finland. Endurance seems to be an increasing popular sport in Finland with approximately 20 rides each year. There are no Arabian races in Finland.

Our main lines of purebred Arabian horses are from Poland, Russia and Egypt. Last year we had a general repetition of the first National Championships with 3 judges from abroad, this event is going to take place again this year. The interest in the Arabian horse in Finland is more vivid today, and we are very happy to have Estonia with us as a new Applying Member of WAHO, as this is our close neighbour.

In 2007 Finland registered 17 foals, they also processed 3 exports and 21 imports.

The Finnish Arabian Horse Society has awarded their 2016 WAHO Trophy to the 11-year old broodmare Wynja af Eggersmann, who is of predominantly Polish bloodlines. This mare is B graded for her offspring. 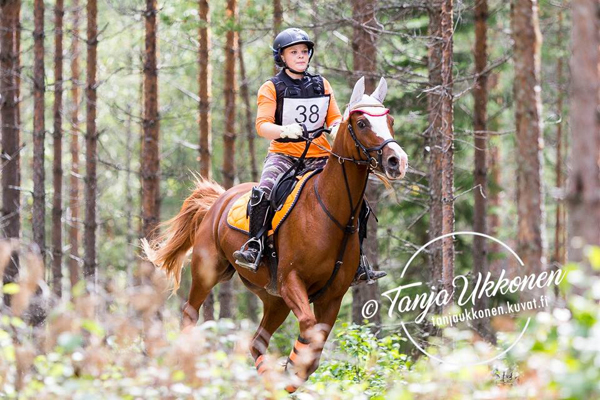 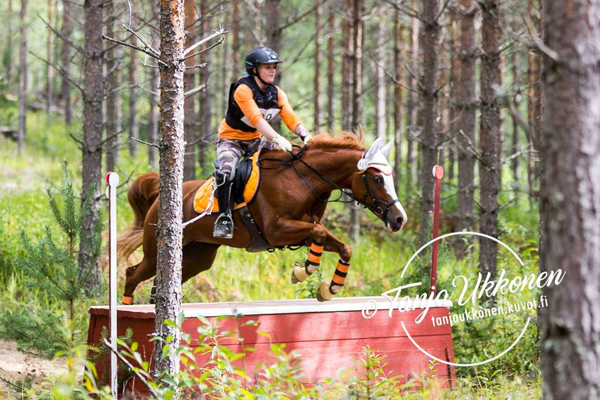 With her kind temperament, Wynja af Eggersmann has acted as a gentle therapy horse for mentally handicapped people and taken part in a sponsorship programme that brings horses to schools, nurseries, retirement homes, and similar social enterprises.

This lovely mare is also a talented jumper, she has been enjoying herself competing in showjumping and eventing. Athlete, therapy horse and broodmare – altogether she has certainly proven the true spirit and versatility of the Arabian horse. 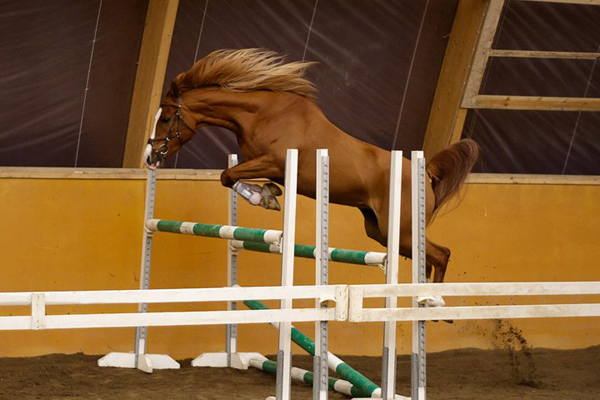 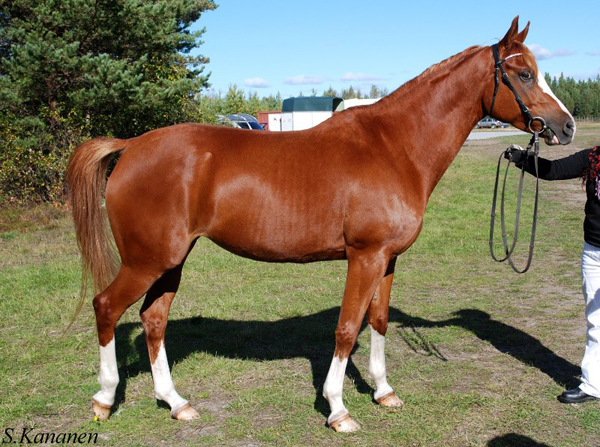 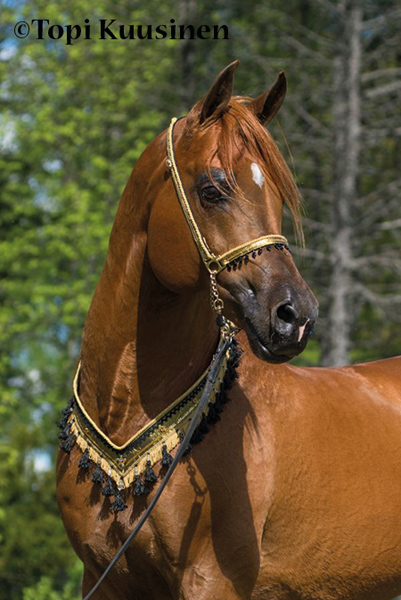 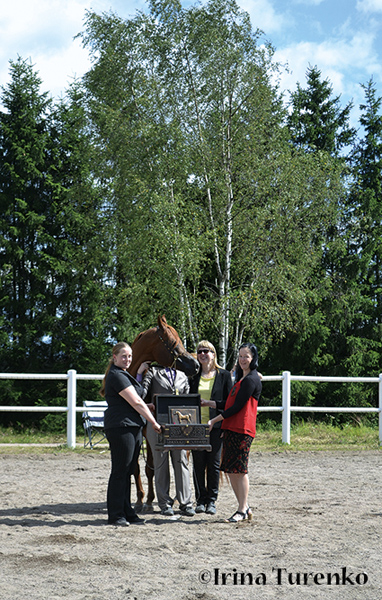 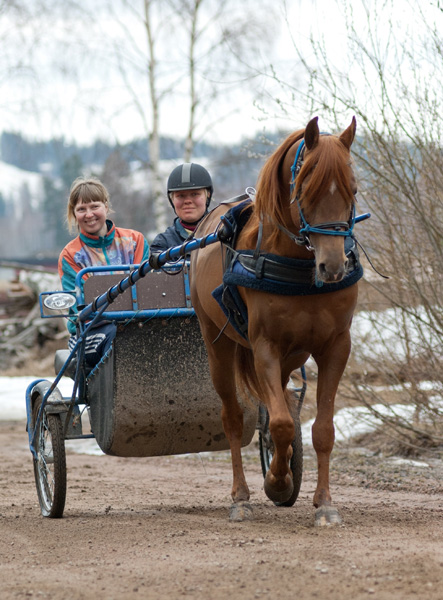 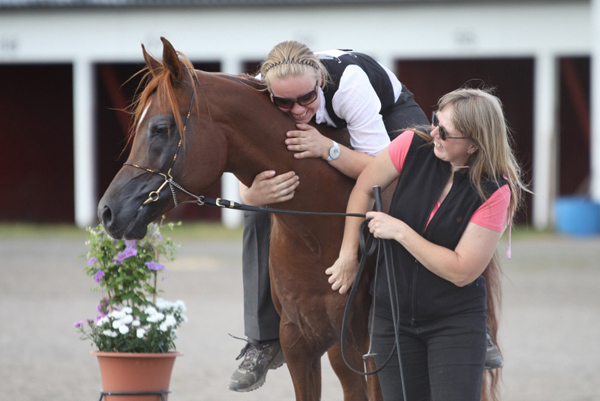 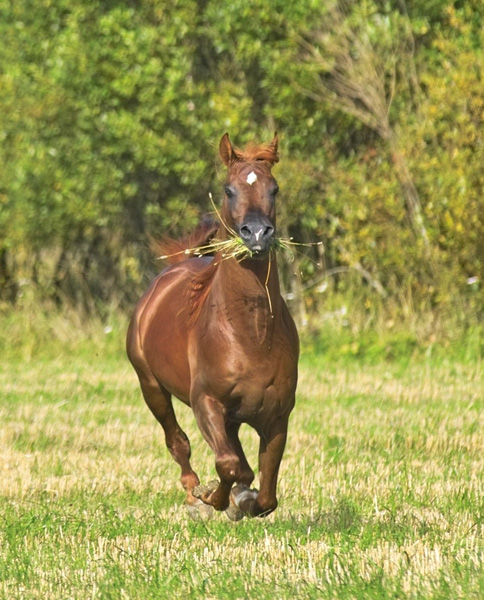 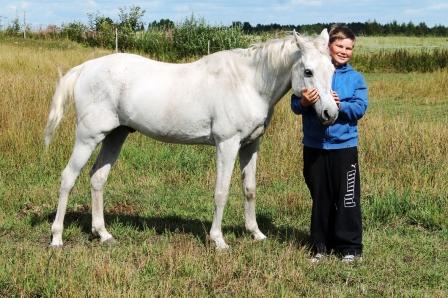 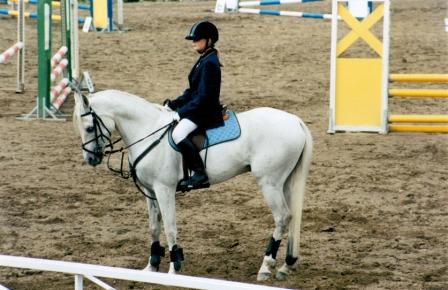 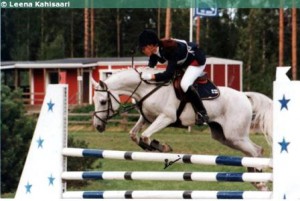 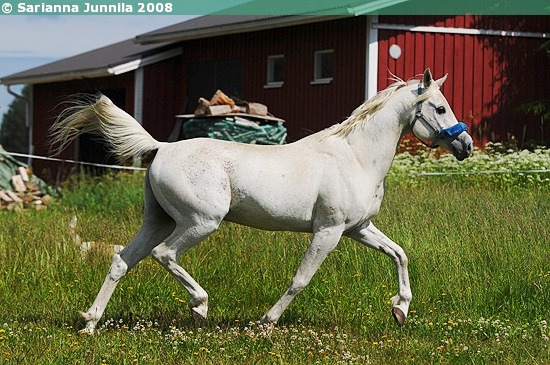 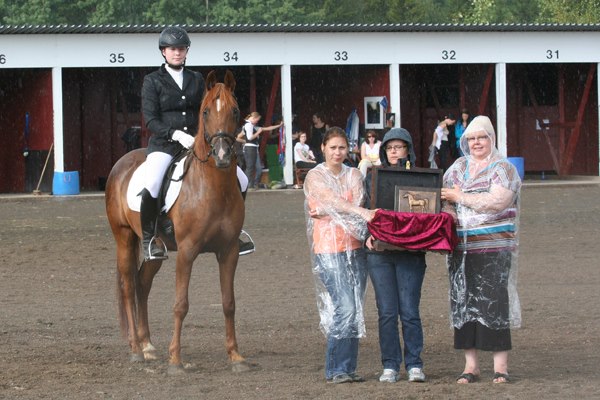 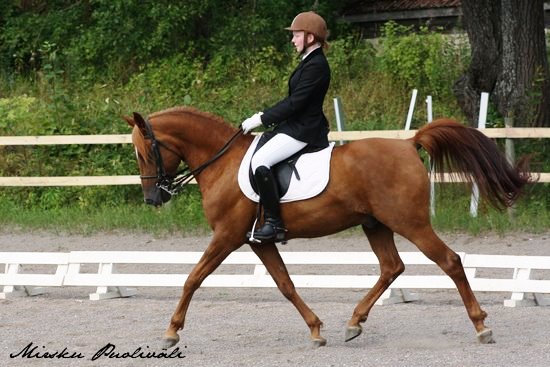 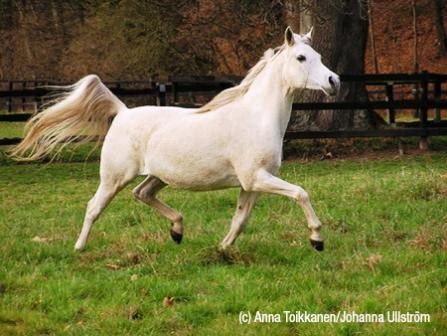 The Finnish Arab Horse Society is delighted to award the WAHO Trophy to Ziryab. This lovely young gelding has already achieved success in Western riding classes and has also done well at halter, being awarded a gold medal with 85.83 points at the Society’s SAHYN show in 2009.

His owner says that Ziryab, or “Repe” as he is called at home, is a very sensitive horse that is always willing to please. He has a lively temperament and “fire in the soul” but his reaction to new things is calm and thoughtful. It is very nice to spend time with Repe and learn new things. 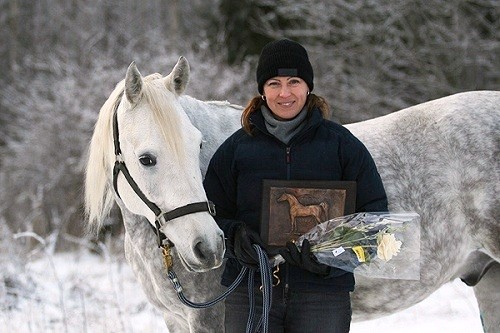 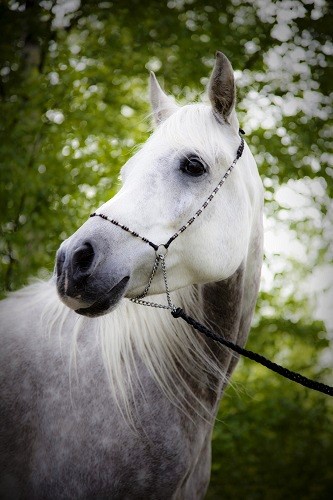 The Finnish Arab Horse Society is delighted to award the WAHO Trophy 2009 to Nauriskydön Farah. This lovely mare has been competing in showjumping, eventing and dressage and has proven the versatility of the Arabian horse. She is a fine ambassador for the Arabian horse in open competitions, and is now competing at national level in showjumping for ponies in Finland, ridden by Elena Hietanen. 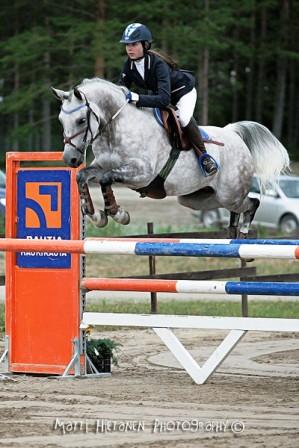 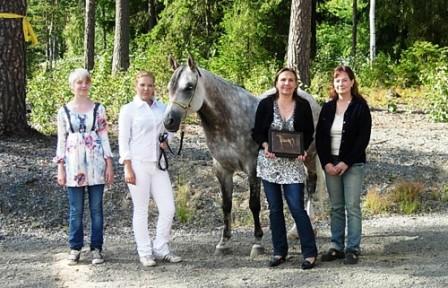 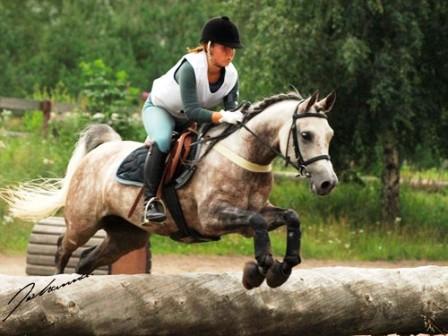 The winner of the WAHO Trophy chosen by the Finnish Arab Horse Society in 2008 is the Arabian stallion Dali, with excellent results in endurance. Dali has previously also competed in equestrianism and show jumping, but currently he is trained only for endurance under his rider, Joona Mickelsson. The pair has achieved a number of excellent results in international endurance riding competitions and they are currently ranked in 22nd place in the FEI world ranking list for endurance.

The Finnish Arabian Horse Society proudly announces that their WAHO Trophy 2007 has been awarded to the gelding Napoleon, who is owned and ridden by 16 year old Marianna Jaatinen. Together, Marianna and Napoleon had many victories and placings in show jumping and dressage during the seasons 2006 and 2007. In 2007 Marianna Jaatinen also won “The Rookie of the Year” award with Napoleon in the Scandinavian Open Arabian Sport Horse Championships in Strängnäs, Sweden. Napoleon has also had success in the show ring being Champion gelding in Ypäjä, Finland in 2002.

Marianna Jaatinen riding Napoleon in the speed section of the competition at the Sandinavian Open Arabian Sport Horse Championships 2007 in Strängnäs, Sweden.

The Finnish Arabian Horse Society selected the stallion Shah El Temareef as their winner of the 2006 WAHO Trophy for Finland. This award is very well deserved. A beautiful stallion, he has competed in endurance riding with very good results in national and international competitions up to CEI** level. In show halter classes, Shah El Temareef was also successful, taking the title of Reserve Finnish National Champion Stallion with gold medal points 87,50 in the Finnish National Arabian Horse Show of 2006. He was also placed third in the ECAHO C Show 2001 in Nurmijärvi, Finland. In between these show ring achievements, Shah El Temareef was busy with his endurance career, and in the 2004 season he completed more approved endurance competition kilometres than any other purebred Arabian horse in Finland.

The Finnish Arabian Horse Society chose Shalomon for their first WAHO Trophy winner, because he is the first Finnish born horse who has gained so much international success. Shalomon is a National and International Arabian Show Winner. He has also won English Pleasure riding classes. His show ring successes include the following:

Shalomon was judged in the German Stallion Show in 2002, where he got a white ribbon. He was also approved as a first-class breeding stallion in Sweden in 2003 and also approved for Swedish riding pony breeding. In Finland Shalomon was approved for Finnish warm-blood, Finnish riding pony and Arabian breeding in 2004. This approval by other breed societies proves his qualities and makes him an excellent ambassador for the Arabian breed in several countries. Having been used as a breeding stallion in Finland, Shalomon has now moved to Belgium with his owner, and there are high hopes for his foals in the future. 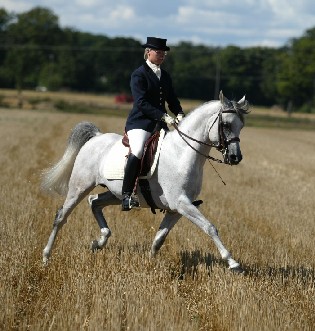