The Israel Arab Horse Society has provided the following information. In 2016, 734 foals were registered.   At least 4 shows are organized each year as well as a small number of races.

The number of registered Arabians in Israel is increasing steadily. About ten years ago, the Israel Arab Horse Society registered between 150 and 180 foals a year, with some 400 registered broodmares and 100 active breeding stallions. That number has now risen considerably, with 150 breeding stallions and between 500-600 broodmares in 2007. As a result of this increase, 449 foals were registered in 2007. Besides that there were 36 imports and 13 exports in 2006; in 2007 there were 26 imports and 8 exports. There were also some stallion exchanges for leasing in Europe. There are now estimated to be 3,500 living Arabian horses. The use of Artificial Insemination is permitted, as is the use of transported semen, embryo transfer is also allowed.

The Israeli Arabian Horse Society has awarded their 2016 WAHO Trophy to the beautiful mare, Zena Al Buraq. Of straight Egyptian bloodlines, she has graced the show ring with success on many occasions and has also proved to be an exceptional broodmare, with multiple show winners such as her daughters Wadad Zamani and Dalal Zamani, both by Laheeb, to her credit. 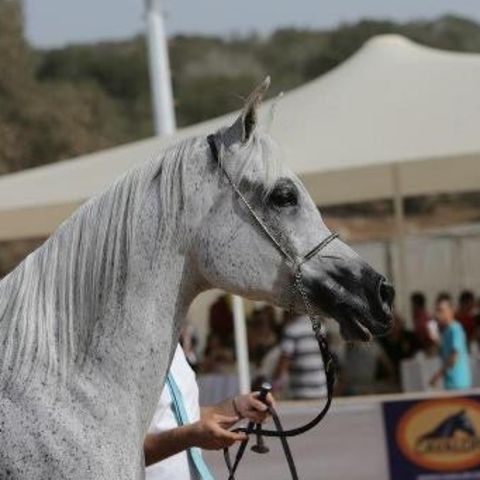 The Israel Arab Horse Society is proud to announce the winner of their 2011 WAHO Trophy. The charming mare W. Warda was awarded this honour in respect of her excellent achievements both in the showring and as a broodmare.

Herself the winner of the National Champion Mare at the Israel National Show in 2006, she is the best producing daughter of her popular sire, MH Weston. Her offspring have also been champions both in Israel and abroad, as several of them have been exported.

A show champion in his own right, Laheeb has also proved to be a very influential sire with many award-winning offspring around the world.

The Israel Arab Horse Registry is proud to announce the winner of their 2007 WAHO Trophy, which has been awarded to the stallion Bariq Al Amal. He is by the American import Baahir, and out of Al Sachra Bint Amal, imported from Germany, making him ‘Straight Egyptian’ in pedigree. Ofer Braaz purchased Bariq Al Amal for his Braaz Arabians Stud at Michmoret at 9 months old and remains his proud owner until today.

A gifted athlete, Bariq began his career as a successful show-jumping horse, competing extensively against Hanoverians, Anglo-Arabs and other warmbloods all over Israel for several seasons, being remembered by sport enthusiasts for easily clearing fences up to 1m 80cms. In 1999 Bariq won his first Reserve Championship title at halter at the Winter Show at Givat Hayim and in 2000 he came back to win the Championship title at the same show.

It was also in the year 2000 that flat-racing for purebred Arabians in Israel was first organized. It was immediately obvious that as a race horse Bariq had found his natural calling. From his very first race he dominated the Israeli track and was named Race Horse of the Year both in 2000 and 2001. In July of 2001 Bariq Al Amal was shipped to Europe – the first Israeli-bred horse to compete in recognized Arabian races overseas. He took two first places in Holland, both were races of 1800 meters or more. Bariq also competed in the prestigious Qatar Derby Day in Belgium where he raced against some of Europe’s best, and took fourth place in very stiff competition. In Israel he is still rated 3 or 4 seconds faster than the best middle-distance track horses running today, and his numbers compare well to the best Arabian race horses in the world. He has run 1400 meters in one minute and 33 and one half seconds and 1800 meters in 2 minutes and 4 seconds.

Bariq remains one of Israel’s most popular sires with over 70 registered purebred foals through the 2006 breeding season. Like all of Al Sachra Bint Amal’s breeding sons, he is an excellent sire of race horses and his progeny dominate the Israeli racing scene. His son, Wazir El Kheil [ex FA Mahfina], bred by Ofer Braaz, has successfully competed both in-hand and as a race horse, winning the title of Reserve Champion Stallion of Israel as well as still holding the Israeli track record for 900 meters. This year alone both the Champion and Reserve Champion Stallions at the Israeli Breeders’ Cup were direct Bariq sons, and in the colts’ section Bariq sons won both first and third places. The two best racing fillies of 2007 were also sired by Bariq. In the 2006 Breeders’ Cup both the best racing Filly and the best racing Mare were Bariq daughters. In fact, last year, apart from Phantom Oneil, Bariq’s maternal half-brother, all of the Breeders Cup winners were by sired Bariq.

For all of these accomplishments it is a great privilege for the Israel Arab Horse Registry to present to Bariq the 2007 WAHO trophy for making such an important and lasting contribution to the Arabian breed in our country. 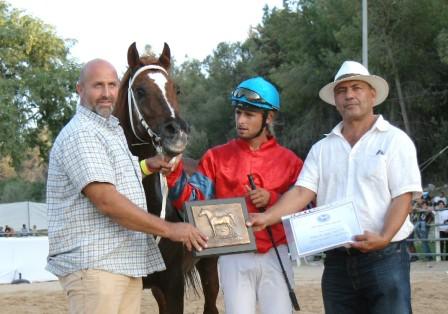 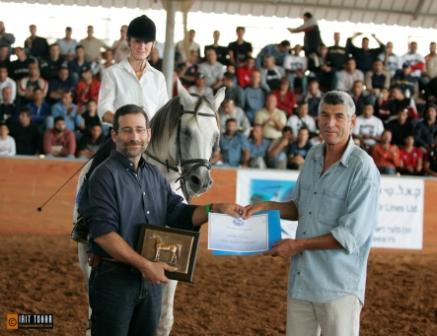