1927-2001
On 14th September 2001, after a short illness bravely borne, Mary Gharagozlou passed away. Mary had been a member of WAHO since the early 1970s, and many of you will have met her at WAHO Conferences.

Mary led a complex, fascinating, but at times difficult life. Her father, Naqi Khan, was a doctor who came from a long line of Persian landlords and statesmen descended from the Gharagozlou tribe, brought from Central Asia to north-west Persia by Tamerlane in the late 14th century. Her mother was Katherine Ladd, an American librarian at John Hopkins University, Baltimore. Mary grew up to become Iran’s foremost expert on dry farming and a tireless worker for the benefit of the nomadic tribes of Iran, especially in times of famine and earthquakes, earning the greatest of respect from all who knew and worked with her. In due course Mary married Majid Khan Bakhtiar, the chief of the Bakhtiari tribe, who introduced her to the Asil horses of Khuzestan that were to become her passion. For many happy years they enjoyed life to the full. After his death in a flying accident, and for various other reasons, Mary’s circumstances changed greatly but she never gave up her work to bring the Arabian horses of Iran to the attention of WAHO and the world.

One of those very special ‘once met, never forgotten’ people, untiring in her dedication to the Arabian horses of Iran, Mary became the driving force behind the acceptance of their horses by WAHO. What you may not know is that in order to prepare the stud books, especially in the early days, she herself travelled by jeep, by horse and even by camel the length and breadth of Iran, in all weathers and often over difficult terrain, interviewing owners and breeders, recording pedigrees, taking markings, arranging for blood-typing and freeze-marking, and taking every opportunity to learn the history of the horses that had become her life’s work. 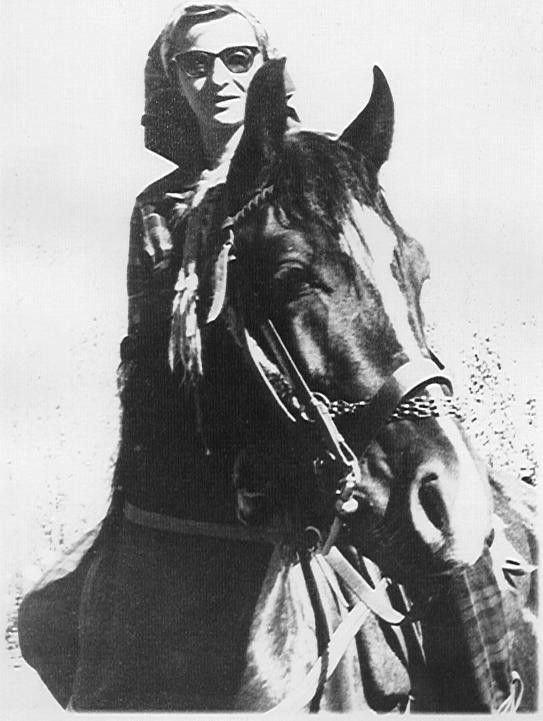 Although Iran’s first stud book was accepted by WAHO in 1976 following two detailed investigation and inspection visits by Dr. Pesi Gazder, Count Claes Lewenhaupt and Don Ford, there followed many unavoidable difficulties and interruptions. It therefore took until 1999 for Mary to finish the work of proving the control of breeding, as requested by WAHO, for the last group of horses, the Asil Arabians of Khuzestan which were first brought to WAHO’s attention in 1974. In this she was assisted by many friends and colleagues at the Equestrian Federation of the Republic of Iran, and by the Asil Association. The latest volume of the Iranian Stud Book at last includes these horses ‘from behind the mountains’, and can be regarded as Mary’s fitting memorial.

In her final years she built a traditional arched house at the foot of the mountains to the west of Teheran, where she lived surrounded by her horses and her dogs. She had no interest in material possessions, other than having sufficient feed for her horses and for her people. After her death, many friends from all over the country came to her memorial and her horses were brought, fully caparisoned, to her graveside.

Mary was a true patriot. The daughter of a khan, she treated people of every degree with the greatest respect, and was respected in return. A great beauty in her youth, Mary retained a lifelong commanding dignity, but when it was fitting to do so she would have all around her in stitches of laughter at her stories, most of which involved poking fun at the pompous. Those of us who knew Mary will never forget her.

We thought you might like to read some of the late Mary Gharagozlou’s writings about the Asil horses of Khuzestan (in Iran), some of which appeared in an article in the USA magazine Arabian Horse World in July 2000. Her personality and passion for the horses shine through in every word.