The Arabian Horse Society of Australia has announced that the winner of their 2019 WAHO Trophy is the outstanding aristocrat broodmare, Mulawa Kara Mia MI. The Trophy was presented by WAHO President Peter Pond at a public ceremony during the Australian Arabian Ambassadors Presentation as part of the 2019 WAHO Australia Conference celebrations, during the East Coast Championships Show at the Sydney International Equestrian Centre. ‘Kara’ was paraded with a selection of her outstanding descendants, to public acclaim. 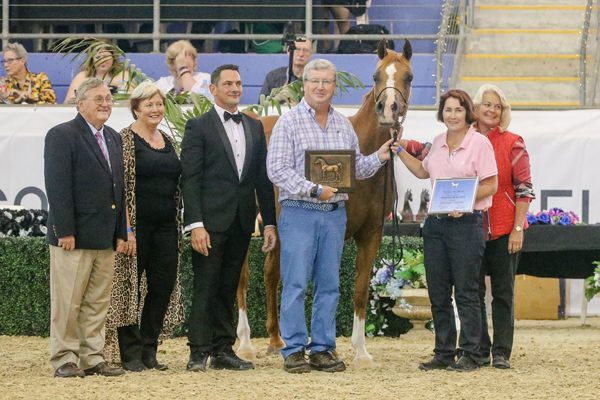 Citation provided by owners:
At 23 years of age, Mulawa Kara Mia Mi is the senior member of the universally renowned Karmaa family of international champions in residence at Alabama Stud, Australia. An icon in her own right as the source the most prolific branch of her esteemed dam family, ‘Kara’ is beloved the world over as the maternal source of Arabian excellence for elite breeding horses, show horses & equine athletes.
Born in the third Mulawa-bred foal crop of her venerated US-imported sire GLF Apollo (Diamond Padron x Per Brio by Percussion), Mulawa Kara Mia MI did much to advance his prolificacy as a sire of superior quality progeny with a distinct modern appeal. The lucky number three also played a role in Kara’s destiny as the third foal – and third successive daughter – of her immortal dam Karmaa, an East Coast & National Stud Show Champion Mare who founded the most important and influential dam family at Mulawa, whose resounding impact still reverberates worldwide. A daughter of World Champion Stallion Kaborr (Naborr x Bint Kholameh by Adibiyez) & United States National Reserve Champion Mare AN Marieta (AN Malik x AN Fayrosa by Fadjeyn), Karmaa was bred by WAHO Founding Member Jay Stream and his wife Dorothy, while her dam was on lease to Tom Chauncey Arabians. This combination of genetics in Mulawa Kara Mia MI’s pedigree, a blend of Spanish, Egyptian, Russian, Polish, Crabbet & foundation American breeding, with a generous dose of globally influential show & breeding horses, has made her an invaluable broodmatron whose impact continues to exponentially evolve and expand across four continents.
A successful show horse herself as a young mare, Kara has left an indelible mark on the breed as a broodmatron both at home and abroad in her most important role for Mulawa. With a lifetime production record of a modest eleven foals, Kara has achieved Aristocrat Dam status with seven champion produce, a near perfect record considering both Mulawa Dancing Flame & Kartier MI were both lost prematurely prior to being shown. All four of her surviving daughters have become invaluable broodmatrons with multiple champion produce of their own. Of these daughters, three – Mulawa Kiara, Krystal MI and, most importantly, Karess, have produced sons who have matured into sires of significance, the result of which has disseminated the Mulawa Kara Mia MI influence around the world. Karess is, most incredibly, the dam of five sons (and counting) who have been used as chief sires both in Australia and abroad, including Australian National Champions Kavalle MI in North America & Konfidence MI in Thailand, the former of which has an impressive siring record of 50%+ champion progeny worldwide, while the latter has emerged as an important sire of endurance athletes in Southeast Asia. 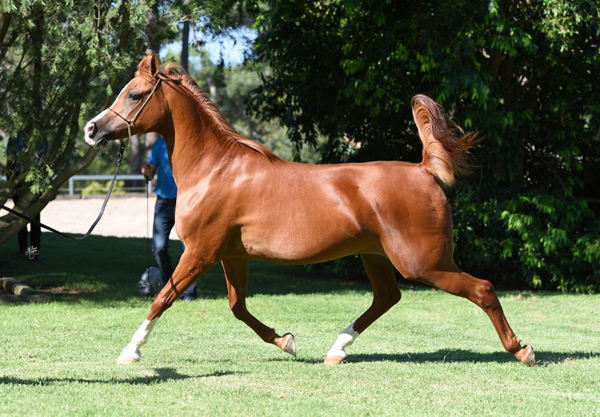 The exceptional Mulawa Kara Mia MI granddaughter Klassical Devotion MI (Klass x Mulawa Kiara) is now owned by HE Sheikh Abdullah bin Mohamed Al Thani in the UAE. A twice Australian National Champion, she has achieved success for her family on the international stage in the Arabian Gulf, the most competitive arena for the Arabian horse in the world, while producing the next generation of champions for her happy new owner. Closer to home, the twelve year old matron Karess made her show ring debut this past November at the National Stud Show, winning the Senior Champion Mare title in spectacular style alongside her daughter, Kavalia MI (by Gazal Al Shaqab), as Champion Arabian Presented by a Youth & Reserve Champion Arabian Handled by a Non-Pro, and in turn her son, Ne Khe Sahn (by Advise MI), as Champion Yearling Colt & Champion Junior Colt Handled by a Non-Pro. This inspiring success for three-generations of the same dam family in one single afternoon was enhanced by the success of two other Karess sons earlier in the season at the NSW State Titles as Katar MI (by Abha Qatar) was named Champion Senior Stallion, & Kharacter MI (by Advise MI) was named Champion Junior Colt.
Descendants of Mulawa Kara Mia MI are now thriving and impacting the breed on four continents, contributing significantly to the advancement of breeding & athletic achievement in important emerging communities such as China & Thailand, amongst the leading centers of activity in Europe & North America, as well as in the heart of the Arabian homeland in Qatar, the United Arab Emirates & the Kingdom of Saudi Arabia. With nearly ten important male descendants siring the next generation of excellence around the world, dozens of multi-generational descendants succeeding at the elite level of equine sport on the global stage and her best producing daughters, granddaughters & great-granddaughters in the primes of their lives, the influence of Mulawa Kara Mia MI is destined to exponentially expand, both positively and profoundly, over the next several decades. Wherever her influence is felt around the world, the excellence of the Australian Arabian horse is celebrated and esteemed.
Now retired from broodmare duties, Mulawa Kara Mia MI still upholds her daily responsibility of raising the next generation of excellence at Mulawa as a full-time ‘nanny’ for the yearling fillies maturing at Alabama Stud in the Upper Hunter Valley in the heart of Australia’s Horse Capital outside of Scone. Healthy & vibrant, and still as endearingly charming as the day she blessed the world with her presence, Mulawa Kara Mia MI is an undeniable testament to the enduring excellence of the Arabian mare and to the inherent attributes for which the Australia-bred Arabian horse continues to be respected around the world.