SHUWAIMAAN JAZEEL 1034 was foaled in 1997 by Musannaan Alra’ad 321 out of Shuwaimeh Darahim 892. In five seasons of racing this fine bay stallion won 20 times from 24 starts, was runner up three times and third once. His most emphatic victory came in last year’s Kings Cup which he won easily by nine long lengths. This was his third Kings Cup and also his last start as he is now retired.

These glittering statistics are made all the more remarkable by the fact that SHUWAIMAAN JAZEEL 1034 was not a very sound horse and he survived two life threatening illnesses during his racing career. So we salute the great heart of this brave horse and the training skills of his handler ‘Abdi’ Redha Abbas who kept him performing at the highest level with the able help of the support staff at the Royal Stables. 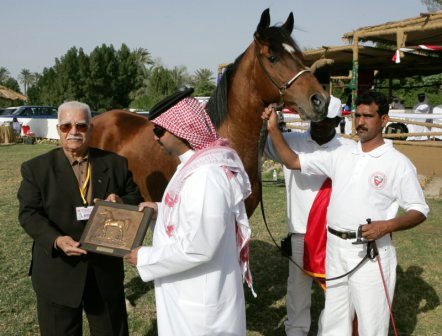