The Dutch Arabian Stud Book Authority is pleased to announce their 2007 WAHO Trophy winner. Salomo – whose competition name is Djinti – is a top international Endurance star with more than 2000 km on the clock including 10 successfully completed 100 milers, totalling over 1600km. He has already been awarded with a special Endurance Achievement Title by the Dutch Studbook and he is multiple National Endurance Champion in the Netherlands.

His successfully completed 10 x 100 milers are:

The WAHO Trophy was presented to Djinti and his proud owners by Mrs. Hannie Wehkamp-Onvlee, Chairwoman of the Dutch Registry, in a special public award ceremony at the Dutch Arabian National Show on the 15th of September 2007. This very special athlete has certainly earned such a prestigious additional Trophy. Recently retired from active competition, Djinti will spend his recreational days in the loving hands of the Lamsma family! 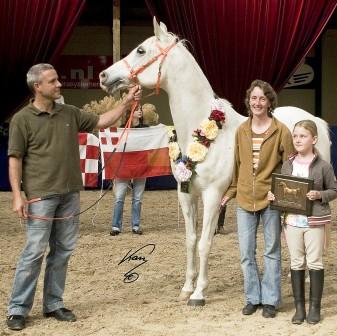