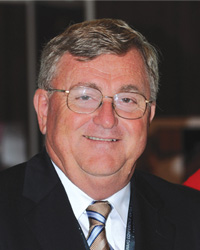 My life-long passion for Arabian horses started when I was still a teenager, inheriting this interest from my father Alan. My wife Jennifer and I founded Forest Hill Arabian Stud in New South Wales, Australia, in 1968, initially with horses of Crabbet and Australian bloodlines but soon incorporating the horses which particularly enchanted us personally, those of Straight Egyptian lines, although we also have a breeding programme incorporating several other international and domestic bloodlines. Together we are still active breeders of Arabians, standing our stallions at public stud, and are fortunate enough to have had considerable success with our horses, many of them the product of several generations of our own breeding programme.

From the day our first home-bred foal was born, I have been totally dedicated to the Arabian horse, both at home and overseas. In the late 1970’s I served as Chairman on a number of National Arabian Promotion Committees in Australia which saw the introduction of The Australian National Arabian Championships and the introduction of The Roll of Merit. I also served as a Director on the Board of the Arabian Horse Society of Australia for a total of 21 years, 9 of those years as Chairman. During my time on the Board the Australian Championships, Roll of Merit and National Judges Panel were incorporated into the Society’s operations. I was also a member of a number of Management, Registry and other important AHSA Ltd committees. Australia hosted the WAHO Conference twice, once in 1984 in when I was Chairman, and again in 2000.

I have been an Internationally accredited Arabian Horse Judge since the early 1970’s, with judging appointments all over the world, including at many major international and title shows such as the Nations Cup in Aachen, Germany (4 times); the World Championships in Paris, France; The Egyptian Event in Kentucky, USA and the UK International Arabian Horse Show. I have also had the pleasure of judging at many other International, National and Regional Championship Shows both here at home in Australia, and around the world including among others Brazil, France, Germany, Israel, Italy, Kuwait, New Zealand, Poland, Qatar, South Africa, Sweden, United Kingdom & United States of America.

I joined WAHO as a Life Individual Member in 1973 and have travelled to many countries visiting both private and State Studs since that time. For many years I participated in the World Arabian Horse Organization Conferences, first as an Observer and also many times as an Australian Delegate. I was invited to join the Executive Committee of WAHO in 1996. During my time on the Executive Committee, I have served as Secretary and Vice President and since 2014 I have been very proud to be the President of WAHO.