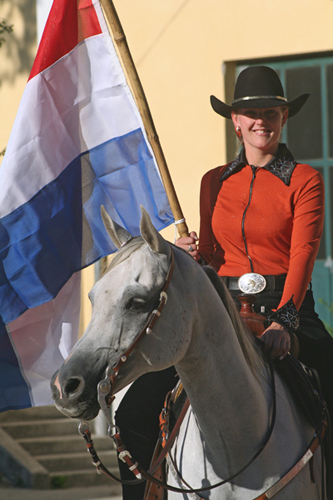 Penthor and his owner and rider Angela van Duyvenbode have been a well known combination in Western All Round competitions for quite a couple of years with many astonishing results. For a period of nearly 10 years Penthor was the only Arabian horse in The Netherlands who obtaining three sports predicates and his all round sports predicate. Angela and Penthor booked many successful results, at both “standard” competitions as well as Dutch championships and European championships.

In 2005, they won a silver and bronze medal in a large open competition with many contestants, but the highlight came in 2006 when they won the gold medal. This was achieved during the trail between 28 participants with all kind of breeds, followed by an all-round championship for all breeds. It is not feasible to mention all achievements, there are simply too many.

At the age of 5 Penthor was class winner geldings at a National Show, at the age of 17 he proved he still was undefeatable when he became champion geldings at as well the Regional as the National Championship Show in The Netherlands with 2 x 20 for movements and 1x 20 for type. Penthor proves that beauty and performance go very well together.

Penthor is a horse who performs with Angela at competitions time and time again, a horse Angela can trust 100%. Angela and Penthor also competed at the European Championships in 2013 in Denmark. At the age of 19 and still young at heart Penthor again won the GOLD Medal Western riding all-round.