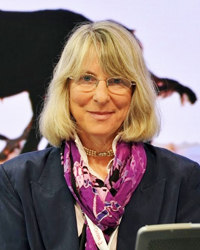 I was brought up with Arabian horses at my parents’ Worth Arabian Stud in Sussex situated on part of the original Crabbet Arabian Stud. I learned to ride at a young age at Crabbet Equitation Centre and still ride and train my own horses. I was heavily involved with the horses at home, and was given a mare by Monica Calvert of the Harwood Arabian Stud as my first Arabian. I helped show my mother’s horses and also rode my own mare in ridden competition. I became a life member of the Arab Horse Society at the age of 21, and attended the first race meeting held by the Society. I volunteered to help at race meetings of which there were about six a year. In 1993 I started my own Binley Arabian Stud in Hampshire mainly with bloodlines from Worth breeding but with some additional lines including in 2008, importing a colt from Australia who I bred there. Most of my horses have been shown both in hand and under saddle and in 2015, my home-bred stallion Silvern Prince was awarded the UK WAHO Trophy for his successful career under saddle, his many Championship titles include Ridden Arabian of the Year, and UK International Ridden Champion on two occasions.

In 1999 I joined WAHO as a Life Member attending my first WAHO Conference in Queensland Australia in 2000. I have attended every Conference since then, many times as the UK Delegate. I feel very honoured that in 2016 I was asked to join the WAHO Executive Committee. I have written many articles, attended numerous seminars particularly on breeding, have visited many countries with Arabian horses and have used this knowledge in understanding WAHO’s aims to help all countries. I look forward to working on behalf of the WAHO members. My love of the Arabian Horse and the Middle East is life long and special. I have always had the welfare of the Arabian horse at the forefront of my vision, in every activity in which they take part, and will continue to do all I can to promote, preserve and look after this special breed.