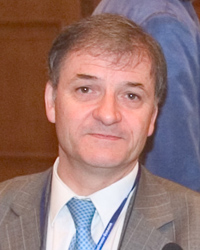 My whole professional career has been involved with horses. After graduating with a degree in zootechnics from the National Agronomical Institute of Paris in 1974, I spent 2 years teaching at the Mostaganem School of Agriculture in Algeria, this was followed by 3 years as the Deputy Director of the National Stud of Saint Lô in France. From 1979 to 2004 I was Director of SIRE, the French National Equine Registry and database covering 3 million registered horses in 50 stud books for different breeds – including of course the French Arabian Stud Book. Since 1999 I was also a Member of the Executive Committee of WBFSH (World Breeding Federation for Sport Horses). From 2004 until 2010 I was Director of International Relations of the Haras Nationaux and Coordinator of the WHIRDEC (World Horse Identification, Registration And Data Exchange Committee, which promotes UELN and data exchanges projects). From 2010 until my retirement in 2015, I was the Director of International Relations of the IFCE (French Institute for Horse Riding and Breeding, merging Haras Nationaux, Ministry of Agriculture, and Cadre Noir, Ministry of Sports).

In terms of my personal and more direct interests with horses, I started riding at an early age, and in 1968 I was the French Junior Showjumping Champion. Since 1980 I have been a National Judge for Show Jumping and Eventing for the French National Equestrian Federation, since 1999 I have been an International FEI steward in Eventing, and since 1988 I have been an ECAHO judge for Arabian shows, with many judging appointments all over the world, mainly since my professional retirement.

Concerning purebred Arabian horses and WAHO, my connection with the Organization dates back to 1974, when I produced the report on the French Arab Stud Book for the WAHO inspection team of Dr. Pesi Gazder and Mr. Ronald Kydd. In the same year I participated at the Malmö WAHO General Assembly as a member of the French delegation and also produced a final study report on “the Pure Bred Arab in the World”. In 1988 I made a report to the General Assembly in London on Purebred Arabian stud book management around the world. Since 1986 I have attended almost all WAHO and ECAHO General Assemblies as the delegate for France, and have also been the delegate to the EAHRIC Committee of ECAHO, and to the WAHO World Registrars meetings.

I have been a member of the WAHO Executive Committee since 2006, and Chairman of the WAHO World Registrars Meetings since 2014. For many years I have also been WAHO’s liaison person to WHIRDEC meetings and for all dealings with the EU Commission on their directives concerning equines. I have always felt very strongly that international collaboration is of the utmost importance, and I will continue to devote my time to working for WAHO and to further improve and strengthen the communication and cooperation between all the member registries.