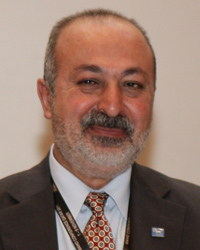 I have a life-long interest in Arabian horses and particularly the history and preservation of the horses of my own country, Syria. I graduated from Damascus University College of Economics and Commerce, and am married with 3 daughters and 1 son.

I have been a member of the Arabian Horse Care Committee in the Ministry of Agriculture since 1979. I started breeding Arabian horses myself in 1980, at my Aljadaan Arabian Stud. I have been a member of the Syrian Stud Book Committee since 1985, and as such I was closely involved with the investigations and research necessary for WAHO approval of the first volume of the Syrian Arabian studbook, and in the production of several further Volumes since then.

I was a founder Member of the Syrian Arab Horse Association, being President of the Board from 2003-2009. I am also Vice President of the Arabian Horse Historians Association. Through my years of first-hand research, I have become a recognised authority on Arabian horse strains and the history and culture of Bedouin tribes and have written many articles on the history of Arabian horses, and been a speaker at many conferences and seminars.

I was a member of the Organizing Committee of the successful WAHO Syria Conference in 2007. That same year, I qualified as a B list judge with ECAHO, and have been an A list judge since 2013, I have judged at many national, international and title shows around the world.

I joined WAHO as a Life Individual Member in 1986, and have attended many WAHO Conferences. I have been a member of the Executive Committee since 1996. I firmly believe that the special connection we have with Arabian horses brings people of all cultures together with this shared interest. I have a very strong commitment to WAHO and to safeguarding the welfare and future of Arabian horses not only in my homeland, but also all over the world.