BAPS is pleased to announced their 2020 WAHO Trophy winner is the excellent racehorse, Messi. 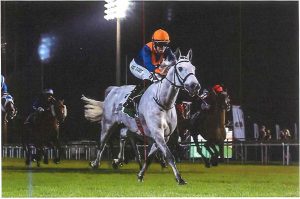 After two very impressive second places in Group I races in France during the autumn, the home-bred and home-trained Messi went on to win one of the most prestigious international races of the 2020 season.  This great achievement is well deserving of the WAHO Trophy award, as it marks a first for Belgium in terms of obtaining such a result.

The Keersmaeker-family started over 25 years ago breeding show-Arabians, but with athletic potential.  Their horses, mostly of Russian bloodlines proved their success in this goal during the early races organized in Belgium by AHRCB. When the French racing Arabians came beating our local-breds, Viktor and Darien and their son Timo decided to breed with some French bloodlines in their quest for a winning race-Arabian.  They imported Hase de Colmar (Tidjani / Cheri Bibi) and bred Jeanne d’ Arc out of her, by Dormane, first racing both of these mares before they turned to their breeding duties.  All the offspring of Jeanne d’ Arc, with different French-bred sires, have been very good race-horses, but none has proven himself like Messi did this season.

The stud of Timo Keersmaeker, Vido Arabians, has now shrunk to a dozen horses, due to the age of Viktor and the passing of Darien.  Among them the best is undoubtedly the 8 year old Messi, already a proven racehorse with many wins and places to his credit in Belgium.  Despite the heavy professional workload on Timo, he decided to train Messi himself at home this season, and the results were quickly there: two wins in Belgium as soon as racing could re-start after Covid-confinement (June), one second place in Germany and next he decided to go for the major challenges: two Group I races in France in the autumn, against some of the best horses of Europe, in both of which Messi finished an excellent second.  In fact he was beaten by only a short head in the the Qatar Arabian World Cup, the Arabian equivalent of the Arc de Triomphe.

Timo then decided to aim ever higher, and try a trip to the Middle East for one of their most prestigious and valuable races, worth over a million Euros: the Sheikh Zayed Jewel Crown at the Abu Dhabi Equestrian Clup.  Messi’s incredible 3.5 lengths victory in this Group 1 race, in which he overpowered a world-class international field, was truly a stellar performance.

Congratulations are due not just to Messi himself, but also to his breeders and owners the Keersmaekers family, to his trainer Timo Keersmaekers, as well as to his jockey Patrick Dobbs.