The New Zealand Arabian Horse Society is pleased to announce the winner of their 2019 WAHO Trophy is the outstanding endurance mare, Makahiwi Phoenix. Her sire Ngapa Joussif was himself a previous winner of the WAHO Trophy, at the grand age of 29 back in 2006, and he also sired the 2009 winner, Cyden Sun, who was 27 years old at the time of the award. WAHO sincerely hopes these genes for longevity will also have been inherited by the lovely mare, Makahiwi Phoenix and we wish her a happy retirement from endurance competition in the future, and many fine foals. 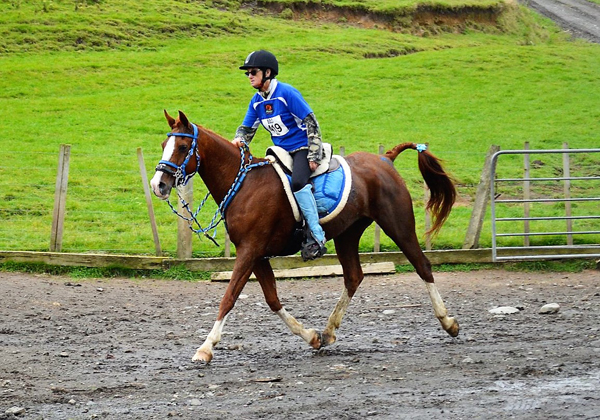 Makahiwi Phoenix enjoying one of her many endurance competitions.

Citation by her Breeder & Owner, C. Struan Duncan:
“It was a midwinter day 2003, I was showing some friends around the farm, looking at some horses. I pointed out a mob of mares wintering in the hills, and noticed a grey mare standing halfway down a very steep ridge. There was a small brown bundle laying at her feet, and I thought, that’s strange, must be an early calf, but why is that mare standing over it. I thought I better take a look, so rode the bike up around the top, and walked down the ridge towards the mare. At her feet was a newborn filly foal, a chestnut with white socks. I picked her up, and with the mare following, carried her down the ridge and into a safe paddock. The mare was Bluebird, a 23 year old by Ngapa Joussif, out of Ngapa Velvet, who had only ever had one foal before, and we weren’t expecting another. The foal, Makahiwi Phoenix, by our lead stallion at the time Lochaber Turk (AU).

She turned out to be a stunning filly, and was duly backed and ridden out by Katrina Duncan. Her first novice endurance rides were based on the farm, and her career had begun.

Maureen and Les Davie then moved to town, and Maureen was looking for a horse to ride so I gave her Phoenix to have a ride on, knowing that she would never be sold out from under her. Here a partnership was born. From 2013 Maureen brought her through the distances nice and steadily. A weighted saddle was made by Leon Liversage especially so that Maureen made weight. By her second full season in 2014, she as starting to win a few rides and Maureen expressed a desire to have a go at a 160km ride. So a goal was set for the 2015 New Zealand Nationals at Taupo. Maureen stuck to the plan, taking her through the qualifying rides 1*, and then 2*, culminating in a successful 3* 160km ride at the New Zealand Nationals also winning the coveted Peter McLellan Memorial Trophy for the quickest lag times – 12 minutes in total for the entire day. 2015 would also see Phoenix and Maureen take out the National Distance Horse and Rider of the Year.

2016 was another full season, but with the New Zealand Nationals in the South Island, Phoenix was prepared for the Man V Horse event instead. She duly took the title, setting a course record which still stands.

2017 and the season’s goal was once again the New Zealand Nationals. This time with an Australian junior, Tahlia Franke, taking the ride. Maureen and Les spent the season preparing her, and Tahlia doing a pre-ride to learn about Phoenix. The result – Tahlia and Makahiwi Phoenix took out the New Zealand National 3* 160km event, and also the National Junior Distance Horse of the Year. In the meantime Maureen had also ridden Phoenix to a Gold medal at the 2017 Masters Games.

For 2018 the season was being set for Maureen and Les’ grandson, Jayden Loveridge, to ride Phoenix at the North Island Championships. Jayden had a very successful season on her, with some good wins, culminating in the North Island Junior 160km title. Maureen once again took Phoenix to the Man V Horse event at the end of the season, coming a close fought second.

Makahiwi Phoenix is a beautiful free moving mare, always looking to work. We have been blessed to have this late surprise adorn our stud. For this season she is again in training, but will be put to the stallion later in the season. We are excited to see what sort of foal she and Inshallah Colorado (AU) can produce.

Photo: Makahiwi Phoenix enjoying one of her many endurance competitions.