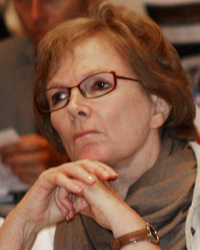 I first fell in love with the Arabian horse in 1960, and started breeding them in December of 1966, so I have just celebrated 50 years as a breeder! In those days there was no A.I. so one had to have one’s own stallion, and nobody really wanted to sell their mares, so we started slowly. I bought my first stallion, an Argentine champion, and my first four mares thanks to the kindness of Dr. Bartolome Mitre of Haras Pavon, one of the foremost breeders in this country at the time. I was also a great friend of Count Federico Zichy Thyssen, from whom I bought quite a few horses. Over the decades I have added bloodlines from around the world. Today we have about 250 Arabians at Haras La Catalina. I breed mainly for showing and endurance, although in the past horses from my farm also did very well in racing, both in Argentina and internationally. We also produce many partbred Arabians mainly for performance and to work on our large agricultural farm, with different combinations of bloodlines.

I am one of the founding members of the Arabian Horse Society of Argentina, I was on their board of directors for many years as well as being Vice President until 2013. I have been an Individual member of WAHO since 1980, when I attended my first WAHO Conference in Cape Town, South Africa, as an Observer. The first Conference where I was Argentina’s voting delegate was in 1990 at Scottsdale, USA. I have attended almost every WAHO Conference since then, either as an Observer or as a Delegate for Argentina and have always been a great supporter of the Organization. It was therefore an honour for me when I was elected to the WAHO Executive Committee in 2013, following the retirement from the EC of my fellow Argentinean and friend, Mrs. Claudia Caraballo de Quentin. Many breeders from all over the world including Europe and the Middle East have visited my farm, and I have enjoyed visiting their farms in turn. I try to promote the breed in particular to newcomers as much as possible, sharing our knowledge and encouraging them and supporting them in various different ways. The Arabian horse has brought me so much pleasure over the past 5 decades, it is my wish to give something back to this wonderful breed in whatever way I can.