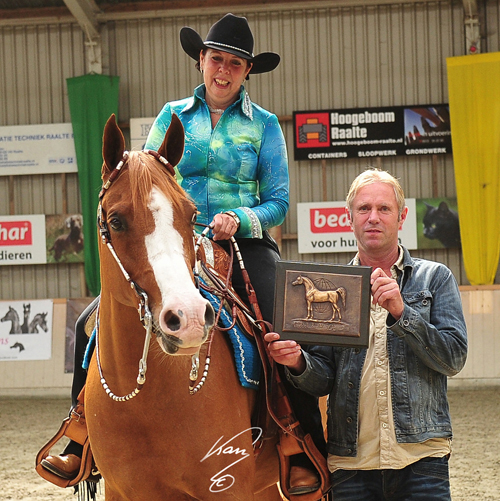 The AVS is pleased to announce the winner of their 2014 WAHO Trophy. Fabanco is a 13 year old gelding of all Russian bloodlines, who once again proves the athletic ability, soundness and trainability of horses from the Tersk Stud foundations which have been so popular in the Netherlands for very many years.

In the past four and a half years, Fabanco and his owner/rider Paulette Zorn took the title of Dutch National Champion multiple times in the various disciplines of Western Pleasure, Trail, Western Horsemanship and Hunter under saddle. They also participated in two ECAHO European Championships. In 2013 in Denmark they were placed 2nd in Western Pleasure and got the Bronze medal in the category Western Allround.
In 2014 they won the Western Ridden Class at the Tulip Cup in Deurne.
At the 2014 Dutch National Championship show, in Raalte, the Netherlands, Fabanco and owner Paulette Zorn were awarded the WAHO Trophy in front of a large audience. The trophy was proudly presented by Fabanco’s breeder, Kees Veldt.