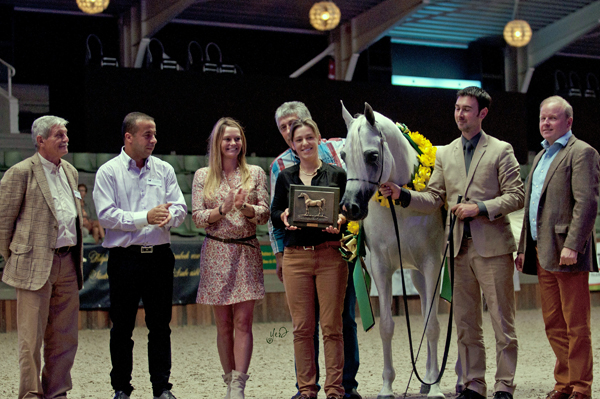 The Council of BAPS npo is very pleased to announce that they have decided to award their WAHO Trophy for the year 2014 to the exceptionally beautiful show mare, and now broodmare, F.M. Gloriaa who impresses everyone with her great appearance.
F.M. Gloriaa was bred by Mrs. Mieke Sans and was born in Kortemark in 2007. Her father is the already legendary WH Justice. Her mother, Psity of Angels, is a daughter of the phenomenal stallion Psytadel.
The sparkling F.M. Gloriaa won the All Nations Cup in Aachen, she won the European Championships in Moorsele and she was twice World Reserve Champion Mare in Paris. F.M. Gloriaa has travelled around the world; she got invited in the Middle East to win champion honors in Sharjah and Dubai.
F.M. Gloriaa now enjoys a normal life in the field at the farm of her recent owner Mr. James Swaenepoel, in Torhout.
She has produced 3 offspring so far, 2 fillies, one by Ajman Moniscione and one by Al Ayal AA. The grey colt that was born in 2014 is by SMA Magic One, one of the best Psytadel sons in the world. SMA Magic One was bred in Belgium by Marnix & Sonja Criel.
F.M. Gloriaa is now in foal to Marwan Al Shaqab. Her foal will be born in March 2015.

The WAHO trophy was presented in front of the audience during the Belgian Championships in the Azelhof, Lier, on the 6th of September 2014.