Poland’s WAHO Trophy was awarded in 2013 to the 28-year old stallion Eldon, the “Grand Old Man” of Michalow State Stud. 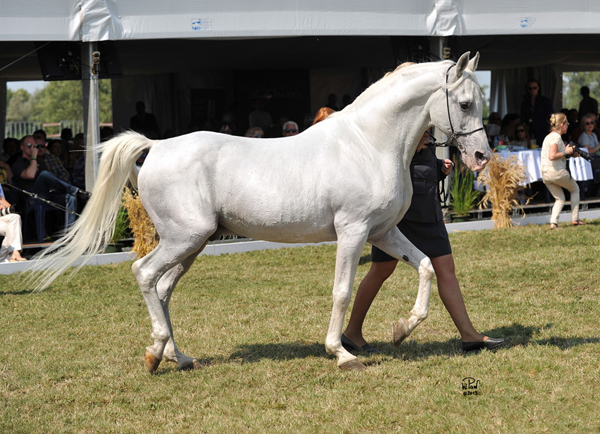 Eldon, Poland WAHO Trophy winner in 2013 during his WAHO Trophy presentation at the age of 28 Photo: Wieslaw Pawlowski & Lydia Pawlowska

His racing record was exemplary: He raced 10 times in 2 seasons (1988 & 1989) with three wins (incl.Comet Stakes), four 2nd places (incl.Piechur Stakes), once third and once fourth. He was only unplaced once.

And as for his breeding record, since 1991 Eldon has become a highly esteemed sire, one of the most important stallions in the Polish breeding programme. To date he has sired 225 foals and is still active at 28 years old. He is the sire of, among many others, the following stallions used for breeding:
* PIAFF – the most valuable son of Eldon, several times national and international champion stallion, bred by Janów Podlaski Stud;
* ESPADERO – the excellent race horse (triple crowned winner of the Produce, Derby and Criterium Stakes), sold at the Pride of Poland Sale 2006 for the record price of 210.000 Euro to Australia, sire of prominent endurance horses, bred by Janów Podlaski Stud;
* EDEON – exported in 1966 to Great Britain (Patricia Lindsay), many times champion of prestigious show events in GB, esteemed sire, bred by Michałów Stud;
* PASTER – successful sire in private breeding in Poland, bred by Białka Stud. 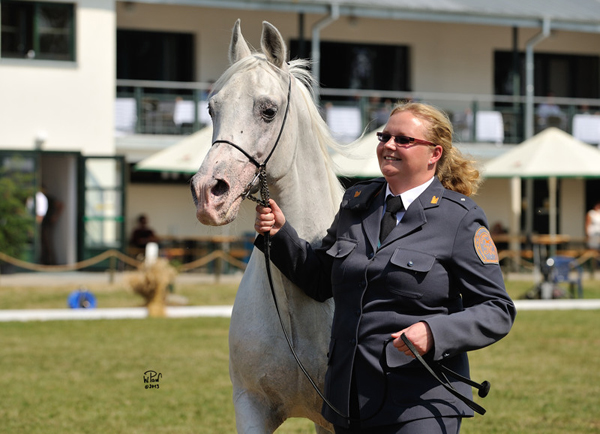 Eldon, Poland WAHO Trophy winner in 2013 during his WAHO Trophy presentation at the age of 28 with Mrs. Magda Helak-KulczyńskaPhoto: Wieslaw Pawlowski & Lydia Pawlowska

Eldon has also proved to be an outstanding producer of broodmares of great merit, with many valuable daughters at the State Studs in Poland, including, to name but a few:
* in Białka – Emika, Fiszka, Floreta, Pereira
* in Janów Podlaski – Arabeska, Arga, Anegdota, Aruba, Atena, Cedynia, Epruwetka, Parafa, Persenkówka, Pescara, Peseta, Siewka
* in SK Michałów – Diastema, Dębowa Polana, Dombra, Escalona, Elgara, Gazira, Kasjopeja, Tonacja.
His exceptional offspring on the racetrack include multiple winners and stakes and Group winners, amongst those are 3 Derby winners and an Oaks winner: Eliat (Derby), bred by Tarus Arabians; Espadero (Derby), bred by Janów Podlaski Stud; Fiszka (Oaks) – bred by Białka Stud, and Sabir (Derby), bred by Janów Podlaski Stud.
Of course many of Eldon’s offspring have been exported around the world, many achieving excellent success in showing, endurance and breeding and other ridden disciplines. Apart from being Chief Sire at all the Polish State Studs and at Tarus Arabians in Poland, Eldon also spent 2 years on lease to Silverdale Arabians in the United Kingdom, where he also sired many quality foals.