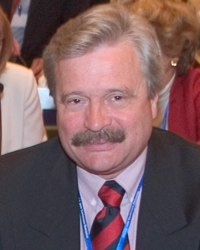 My contact with horses started when I was a young rider competing in show jumping and cross-country eventing. It helped me to choose my profession as veterinary surgeon specializing in equine medicine. My first job was in Janów Podlaski State Stud in Poland as resident veterinarian from 1978. In the State Stud I met not only Arabian and Anglo-Arabian horses but also great horsemen. My long discussions with Mr. Andrzej Krzyształowicz and Stud Inspector Izabella Pawelec–Zawadzka taught me a great deal about Arabian horse breeding in Poland and sparked my passion to learn more and more from such great experts. The first step was beginning to judge at Arabian shows in the mid 1980s. Since then I have continued to judge, including to date all the major shows in Europe, the Middle East, Australia and USA. This has provided me with a great deal of experience and given me a broader idea about global Arabian horse breeding, as I particularly enjoy seeing the different horses in different countries and especially the original desert-bred horses still found in their homelands today.

Mr. Andrzej Krzyształowicz appointed me as his successor as breeder and Director of Janów Podlaski State Stud. From the beginning of 1995 I became a member of the Board of Janów Podlaski State Stud, and from the beginning of 2000 until 19th of February 2016 I served as President of the Board. During all those years I had very close relations with the Polish Arabian Stud Book, as the person representing one of the biggest breeders and owners in Poland.

I was also a Board member of the Polish Jockey Club for many years until 2016, which I considered an important role because both our Arabian and our Anglo-Arabians have always taken part in racing in Poland. I was one of the organizers of PZHKA/Polish Arabian Horse Breeders Society, serving as a Member of the Board and Advisory Committee until now. Beside my activities in pure Arabian horse breeding, I also have experience as a breeder of Anglo-Arabians. From 1998 till now I have been a member of the Stud Book Commission of the Małopolska Breed, registering Anglo and Partbred Arabians in Poland. This Stud Book is controlled by PZHK /Polish Horse Breeders Society.

For two terms (8 years) I was a member of the ECAHO Executive Committee, as Treasurer. I have also been one of the instructors of many ECAHO judging courses, and have combined some judging appointments with giving seminars to encourage newcomers to the breed, as I feel it is very important to share and pass on some of the experience and knowledge I have gained over the past 40 years.

I have been an Individual Associate Member of WAHO since 2004, together with my son, Dr. Jan Trela, who is also an equine veterinarian. I am married with 2 sons and 3 grandchildren. Since March 2016 I have been working as an independent horse breeding consultant, advising and helping owners with their breeding programmes in a number of countries around the world.

I was on the Organizing Committee for the successful 2004 WAHO Conference in Poland. I joined the WAHO Executive Committee the same year and I take this responsibility to the wider Arabian horse world very seriously.
I have been honoured to be WAHO’s Vice-President since 2015.