The Dutch Arabian Stud Book Authority is pleased to announce their 2008 WAHO Trophy winner. Anthal is a Dutch 1st Premium licensed breeding stallion, and an “Elite producer”, a studbook breeding status that is for the most part achieved by the breeding, show and sports achievements of his offspring. Anthal’s pedigree combines well known horses from the famous state studs of Tersk and Marbach. He is a multiple National and International Showchampion and has been ridden to the Dutch dressage level M. For more than 20 years the pride and joy of owner Abigail Ligthert, he is the horse which started “Arabian Fantasie”, one of the biggest show and breeding stables in the Netherlands. At 25 years of age he is still looking as strong and as healthy as ever! 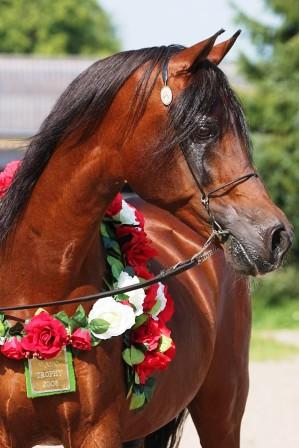 The WAHO Trophy was presented to Abigail Ligthert by Mrs. Marianne Dijkman, Vice-Chairwoman of the Dutch Registry, in a special public award ceremony at the Dutch Arabian National Show on the 31rd of August 2008.

A popular and proud winner of the WAHO trophy, this gentle stallion is now retired from active breeding and will continue to enjoy the love and care of his owner at the Arabian Fantasie Stud.