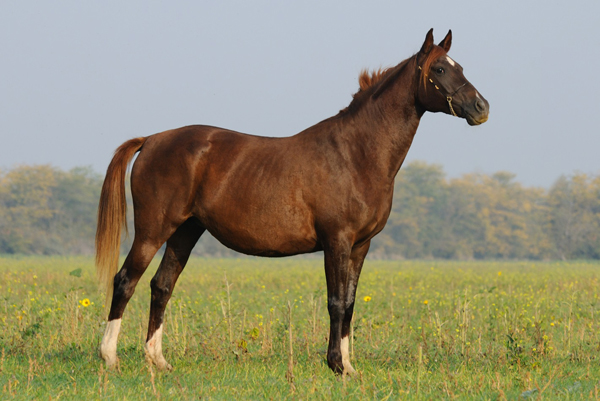 Russia’s 2013 WAHO Trophy has been awarded to the chestnut mare Aiova. She has proved herself to be one of the most valuable mares at the private studfarm of Mr. A.A. Belov, and a bright representative of the famous and numerous family descending from Mammona. Her sire Vatikan (Vatican) was an outstanding racehorse in Russia before his export first to Holland in 1988 and later to France in 1992 and thence to Jordan in 1999. From 39 runs, Vatikan won 9 races and placed 16 times, his wins included six top stakes races. Aiova’s dam Academy was an important broodmare at Tersk Stud. Aiova herself ran 10 times before retiring to the breeding barn at her owner’s farm.

Aiova is now the dam and grand-dam to an increasingly successful family, including many multiple race winners – two of which are winners of the Great Kazan Derby.
Among the best are the following: