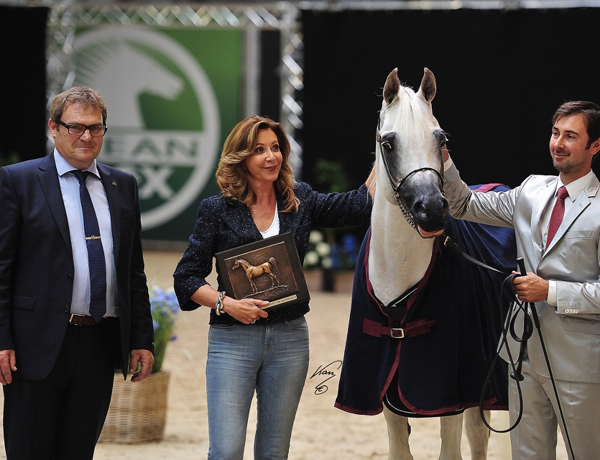 He was born into the loving hands of Martine Van Hee on 9th June 1997. Observing his first steps, it struck Martine after only a few minutes… A star was born!

Eternity Ibn Navarrone-D follows the lead of his mother: the world-famous mare Navarrone “P”, herself a former winner of Belgium’s WAHO Trophy in 2007. That same honour being conferred to Eternity now, makes Martine very proud.

His renowned show record, from his debut in 1997 as Belgian foal champion to his last title as 2015 Platinum Champion in Paris, is too long a list to elaborate on. Altogether Eternity won 23 titles. These are only some of his fantastic eye catchers:

Not only as a show horse, but also as a breeding stallion Eternity has made his mark. These are but a few of the champions bred by Martine herself:

There are many more International and National Champions all over the world!

To crown his show record and at the same time end his show career, Eternity was awarded the 2015 Platinum Trophy in Paris. Martine obviously hopes for Eternity to remain in good health for many more years, and for him to produce many more outstanding foals.