The SZAP is pleased to announce the winner of their 2020 WAHO Trophy is the 19-year old mare, Ahira Bint Narym. 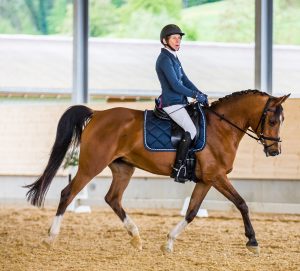 Citation by the Owner’s family:

On May 1st 2001, the bay mare Ahira Bint Narym was born at Shareefah Arabians (named after Ahira’s grandmother Shareefah), representing the 2nd breeding generation at the farm.

The name Ahira means “forever” and according to this motto Ahira has lived with her breeder from birth until today. Three quarters of her breeding is Russian and one quarter Egyptian. Her dam Asari Bint Grand was already very successful in show and dressage competitions.

As a filly foal, Ahira was awarded Gold at the Swiss National Stud Show in August 2001 and won the filly class with the equal highest score, shared with Balinka who was bred by Didier & Ivana Thiévent. The following year Ahira was 2nd in the yearling mare class at the C-Show in Holziken, Switzerland.

She inherited her show talent from her dam Asari Bint Grand (Grand/Shareefah), who won three gold medals at shows and was awarded the highest score of 7.9 for the best Swiss-bred Arabian mare in 2003. Ahira’s full brother Stromboli Ibn Narym was also named best colt at the 2002 foal show. From her sire Narym (Balaton/Nemara) Ahira inherited the outer appearance, the bay colour and also a lot of show potential.

Ahira spent her youth on the spacious Swiss mountain pastures of the Hossle family on the Bürten farm in Reigoldswil, where she was able to enjoy her early life to the fullest and thus grow into a pretty, harmonious, kind mare without any pressure to perform. At the age of 3 she returned to her home stable, re-joining her mother and grandmother.

Without any pressure of time, we carefully got Ahira used to saddle and rider. We always put great importance to our Arabian horses not only presenting themselves well at shows, but also being able to perform well under saddle.

We trained Ahira ourselves to a medium dressage level and successfully competed in various dressage competitions over the years, also against warmbloods, in the GA/L classes (Novice and Elementary levels).

In 2013 she took a baby break and gave us a beautiful filly by the Danish Warmblood dressage stallion, Glock’s Zonik.

In 2020 Ahira Bint Narym passed the performance test in dressage, a remarkable achievement for a Pure-bred Arabian mare aged 19.

She is a lovely mare and very willing to perform.  Her sensitive nature, which she inherited from her sire Narym, did not always make dressage riding easy.  This is one of the reasons we appreciate her successes even more.