The Lithuanian Arabian Horse Association is happy to announce that the winner of their WAHO Trophy 2020 is the 12-year old stallion, Aristokratas.

Aristokratas is sired by the Polish stallion Grafik (Eukaliptus / Gaskonia) who was leased by Vilnius Stud for the 2007 breeding season from Michalow Stud.  His dam Alka (by Elbrus out of Aquatoria, descended from the great foundation broodmare, Taktika) herself won Lithuania’s 2007 WAHO Trophy.  She has been a highly esteemed broodmare at her home Stud with 11 excellent foals to her credit, several of them also used in the State Stud breeding programme.  It is worth noting that her son Abatas, also a breeding stallion, won Lithuania’s WAHO Trophy in 2006.

A show winner in the past, Aristokratas has already proved himself as an excellent sire, with very promising progeny.  He has an excellent temperament and, with his pedigree and accomplishments, is sure to be a great asset to his home Stud. 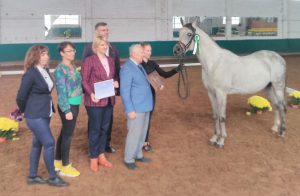 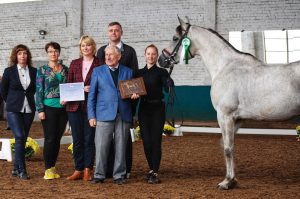 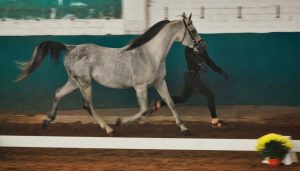 Aristokratas winning his show class in 2013.