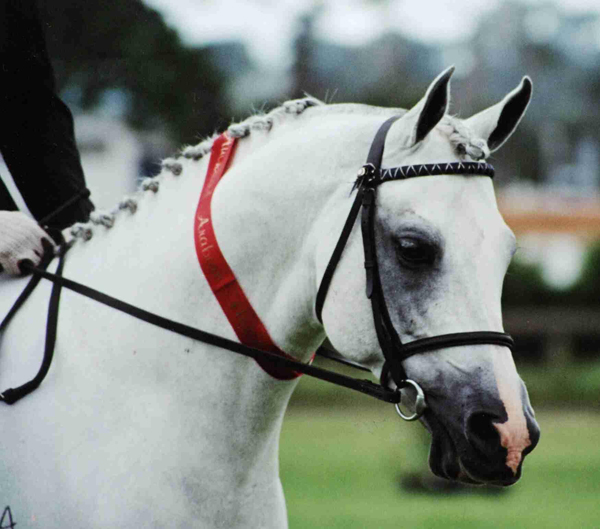 The following Citation is provided by his Owner, Jenny Klemra:
With the purchase of Willowvale Saarfari, our ‘perfect stallion’ had arrived. In 1996 he won the New Zealand National Supreme Champion Purebred title at the age of 14 months. Little did I realise that at that time he would soon be grazing in our paddock and become an important part of Golden Shelter Arabians. Willowvale Saarfari was purpose bred by the late Noel and Gaynor Evans of Willowvale Arabians being of the ‘golden cross’ – with his Spanish, Crabbet and Egyptian bloodlines. Saarfari’s bloodlines on both sides of his pedigree need no introduction, they are world renowned in both type and performance – with El Shaklan on his sire’s side and Ralvon Pilgrim on his dam’s side he was always destined to be a star.

Saarfari has excelled in both ridden and halter classes, his show record is overflowing with major awards. Winning nine New Zealand National titles, he is Roll of Merit at Halter and Elite Roll of Merit in Performance. I cannot put into words what Saarfari has brought to Golden Shelter Arabians – with his wonderful progeny and the people we have met through him which has brought us to where we are today. He is more than we could have wished for and to us he epitomizes what the Arabian is all about. He has taken us on the most amazing journey.

Progeny – some results of his progeny’s achievements: