The Dutch Arab Horse Society is pleased to announce the winner of their 2013 WAHO Trophy. The award has been presented to the Straight Russian gelding Vestival, whose parents were both imported to The Netherlands from Tersk Stud. With some of the greatest names in Russian breeding in his pedigree, Vestival was born out of an ideal Tersk combination of performance and beauty. He won show championships in The Netherlands as a foal and for some years went on to a successful career as a breeding stallion. His own foals were very successful as well, for example his colts A.F. Parsifal, Rih-Al-Rayyaan (recently sold to Martinique) and Vestikay all became foal champions at shows. His daughter, the 1st premium mare Lima Juny, was Dutch National Champion and best moving horse of 2010. Her new owner the Al Safir Stud showed her in the spring of 2013 at the Kuwait International Arabian Horse Festival where her movements were rewarded with 96%

In 2010 Vestival proved to be a carrier of CA and it was decided to geld him and break him in for riding. In October 2010 Marijke Slok Soede started riding him and in February 2011 he instantly won two first prizes at his first dressage competition ever. Two months later, at the Dutch Championships Dressage, he obtained the highest score of the day and became Dutch National Champion. At the Regional Championship Show he was presented in hand for the first time as a gelding, which resulted in a Gold Medal. During the National Championship Show in The Netherlands he was winner under saddle and 3rd in hand with perfect scores. His elegant appearance was noticed by the judges during dressage competitions with many top 3 achievements against warm blood horses. His qualities as a riding horse are very special. He has flexible and powerful movements, a beautiful long neck, much front and natural setting. Within a very short period of time Vestival achieved his sport predicate for dressage from the Dutch Arabian Studbook.

He is certainly a very worthy winner of the Dutch WAHO Trophy for 2013. The award ceremony took place at the Dutch National Championship Show, where Mrs. Toto Modderman presented the WAHO Trophy to Vestival and his owner, Marijke Slok Soede. 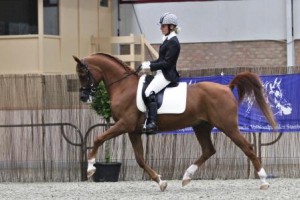 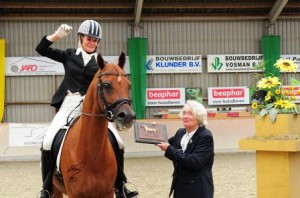