The Arabian Horse Breeders Society of Uruguay have provided the following information. In 2017, 445 foals were registered. 41 horses were exported and 2 horses were imported. There were 80 show classes, 3 races and 15 endurance competitions. Liberty classes are also popular activity in Uruguay.

Frederike Vreedenburgh, Uruguay: My name is Frederike Vreedenburgh, I am the delegate for the Arabian Horse Breeders Society of Uruguay. Mr. Vice-President, Your Royal Highness Princess Alia, members of the WAHO Executive Committee, Ladies and Gentlemen. It is with sincere gratitude to High Highness Sheikh Isa Bin Salman Bin Hamad Al Khalifa that we are once again assembled on this legendary island ‘Dilmun.’ The Royal Studs of Bahrain are world famous for keeping twenty desert strains asil, an achievement we all should applaud.

In recent years, Uruguay has become an export country for Arabian endurance horses as well as for a small amount of race horses. The horses have to be microchipped and registered by the Ministry of Agriculture, the registration fee includes an amount which goes towards Uruguay’s membership of WAHO. Our registry information is available online.

Apart from national meetings for all breeds, the Endurance Association of Uruguay also organises FEI competitions, including one sponsored by a Stables in Abu Dhabi. The condition and welfare of the horse is of upmost importance at these meetings. A third training for endurance is created at Punta del Este, so that the endurance centres are spread all over the country. The Uruguayan Arabian population is stable, 468 foals were registered last year, born on lush pastures all over the country. They are efficiently trained over hilly countryside and beaches. Auctions are held by most studs on a yearly basis, many foreigners come to buy their horses there. Our riders have completed successfully in many countries in South America, in the Emirates and in Europe. Recently they competed at the World Endurance competition in Slovakia. At the racecourse in Montevideo 3 races are held for pure Arabians sponsored by Shadwell stud.  Since 3 years ago, the racecourse has had a jockey school, the education of the jockeys is taken very seriously for the welfare of the horse, as well as for the behaviour among human beings. Presently a project is on the way for an anti-doping laboratory.

The halter competitions are included in the Agriculture fairs for all breeds twice a year, as well as the National Arabian Horse Week at Punte del Este.  This year a new halter class was introduced “Al Arabe Al Natural”. The three International judges admitted that they had never before judged such a class. No touch up is allowed and the horses have to be shown by their owners, it is the way how breeders select their horses for their breeding programme. Last December a contract was signed for 5 years with a new multinational convention centre, and we are looking forward to being able to organise a Pan-American Arabian Championship in the near future. Now we are still struggling to break down the various customs obstacles for bringing horses from the neighbouring countries together. Thank you very much.

Mrs. Frederike Vreedenburgh, Uruguay: Mr. President, members of the WAHO Executive Committee, ladies and gentlemen. My name is Frederike Vreedenburgh, delegate for the Uruguayan Society of Arabian Horse Breeders. I would like to introduce my co-delegate, Mrs. Bernadette Campomar. In the first place, we express our deeply felt gratitude to our honourable hosts for bringing us together in such an inspiring surrounding of all Arabian horse breeders. As we can see, you have put a great effort into creating an attractive ambience for promoting our unique breed, bringing together as many important strains as there are in the present world, and showing us a variety of disciplines in a highly academic way.

In Uruguay we are experiencing a significant rise in interest in horses. You could say a “horse boom”. Due to an increase of economic power on the one hand, as well as a nostalgic feeling about our equine friends since early days. Even today in rural areas, children are often riding to school having no other transport available. All over the country our Arabian horse breeders organise regular and successful auctions. New breeders are getting involved in our five annual shows. Once a year a friendly show is organized at the Cavalry School close to the capital, Montevideo. At this show new owners and breeders are encouraged to show their horses. At the same time the national judges and apprentice judges get the opportunity to judge the halter classes at this popular show without foreign competition.

An independent body called the Association for Endurance in Uruguay organises approximately 20 endurance rides and 10 international competitions a year, all over the country. The majority ride on cross-bred or pure Arabians in these competitions, which are open for all breeds. In comparison, the ranking of Arabians is the highest. Competitors from the region as well as teams from Malaysia, Qatar and other individuals participate on borrowed horses. The endurance tests are a great forum for promoting the Uruguayan Arabians internationally.

Besides the publicity of competitions, auctions and riding tours through websites, magazines and other media, the online database is a great step forward for our Society. Since July of this year microchipping of newborn Arabians is mandatory as well as the DNA parentage test prior to registration. The Uruguayan Government realises the economic and cultural importance of the horse breeds. Recently a Seminar on The Horse was organised by the Chairman of the Lower Chamber of Parliament. All different Societies were invited to expose their activities and their targets to a numerous public with representatives of the various political parties. The importance of achieving an equine passport for our region was highlighted by the representative of the Arabian Horse Breeders Society. Our membership of WAHO, including a Committee member, was mentioned as well. The Minister of Foreign Affairs and of Tourism agreed to bring our request to the table of the next Regional Ministers’ Meeting. Thank you very much.

My name is Bernadette Campomar, I represent the Uruguayan Breeders Association. I would like to thank His Majesty Sultan Qaboos Bin Said, His Excellency Mr. Nasr Al Kindi, The Royal Court Affairs, and the Organizing Committee for hosting this Conference.

The WAHO Trophy was awarded in 2006 and 2007 to the winners of riding competitions, and in 2008 to the National Endurance Championships winner. Our Association has 83 members. Thank you very much.

The Arabian Horse Breeders Association of Uruguay is especially proud of the history of the Arabian horse in our country. Up to now we have published 7 volumes of our stud books, up to the year 2004.

237 foals were registered in 2006, we had 270 registered broodmares and 108 breeding stallions. All foals are parent verified by DNA. 1 horse was exported to Brazil in 2006, and a total of 40 were imported from Brazil and Argentina. Artificial Insemination and Embryo transfer are allowed.

Endurance riding is very popular in Uruguay with at least 12 competitions each year. Only recently, our team won the Gold Medal at the World Championships for Young Riders in Argentina. Riders from the United Arab Emirates, riding Uruguayan horses, were placed second, assisted by Uruguayan technical and veterinarian personnel. Our Uruguayan team has also taken part in the world championships.

Showing is also popular, with 3 shows held each year. Last year our main show, at Punta Del Este, introduced the European-style triple judging system, which proved successful and will be used again in future. Recently the entries for halter classes have doubled, a lot of valuable stallions as well as mares having been imported from the USA, Brazil and Argentina. New breeders showed up at Punta Del Este and the stables attracted a large crowd. This year, two training courses will be organized during the National Show, one course for beginning judges, and one course for handlers. Both courses are open to non-members as well as members, for the same fee.

Unfortunately, the equitation or ridden classes is still considered a ‘side-dish’. But the Society does encourage these classes because this is the main part of the Arabian horse, to show himself under saddle. Competitions for skillfulness are held at every show, and a ranking has the same points system as the halter classes for the National Championships.

In 2007, Uruguay reports 406 foals registered, in the same year 3 horses were exported and 30 imported. 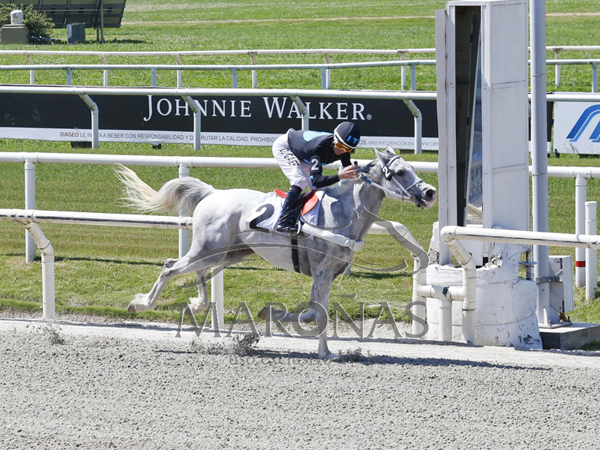 The Arabian Horse Breeders Association of Uruguay have awarded their 2007 WAHO Trophy to the 2006 winner, the stallion H.M. Zahir. In new ownership in 2007, he earned this award through his excellent performance during the National Championships Show in Punta Del Este.

H.M. Zahir was ridden in competitions by Marcelo Guinovar, as he was last year and he has won this important award for the second year running mainly through his excellent performance in various riding competitions as well as in show and liberty classes.

It is with great regret that we inform you that immediately after the show, H.M. Zahir passed away following complications after colic surgery. He will be greatly missed by all his connections.

The Arabian Horse Breeders Association of Uruguay have awarded their 2006 WAHO Trophy to the stallion, H.M. Zahir. The presentation of the WAHO Trophy which took place at the gala night in the 5-star Conrad Hotel, during the National Championships Show in Punta Del Este, was the highlight of the event.

H.M. Zahir won this important award mainly through his excellent performance in various riding competitions as well as show and liberty classes. Ridden in competitions by Marcelo Guinovar as well as by Luca Luccini, unfortunately we are sad to report that Luca passed away due to a motorcycle accident. In the annual bulletin published by the Arabian Horse Breeders Association of Uruguay, due attention is paid to the WAHO Trophy winner and to the award ceremony. 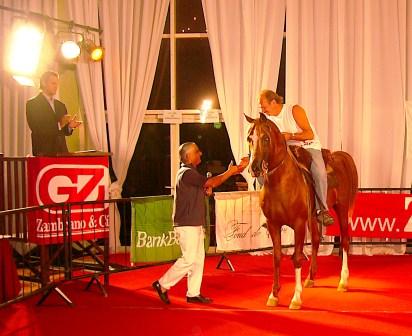