The Arabian Horse Society opf Australia is proud to announce that the winner of their 2013 WAHO Trophy is the veteran stallion, Sunland Australian Ambassador. His owner was presented with his award at the 2014 AHSA Annual General Meeting.

Sunland Australian Ambassador [“Fatso” to his friends] has spent almost his whole life as the adored centrepiece of Narelle Kinnear’s small but very active Nevertire Studfarm. There he has sired 25 registered progeny, with a very high percentage becoming successful showhorses like himself. Ambassador in both name and deed, this mighty chestnut stallion has won friends wherever he went, with his mesmerizing appearances in show classes, his superb length of stride, and the fact that he is quite a character, with many quirky stories to his name. At 30 years of age he is very much a senior citizen these days, showing all the appropriate signs of a life very well-lived.

His is a rags to riches story. He was bought by his lifetime owner Narelle Kinnear at a doggers sale during a period of severe drought, with unsigned papers to his name, and very much in need of some ‘tender loving care’. He had rainscald and a shaggy coat but he struck gold that day in his new owner and he would never be thin again! With perseverance his papers were put in order, as Narelle could see the potential there even in its raw state. His pedigree is a rich blend of some of the greatest early Crabbet bloodlines of Australia. He is in fact almost pure Crabbet. His sire, the rangy bay Al-Meraine Riff Raff (Shafreyn/Mutilla), had a long and consistent career in a variety of saddle events including Western, English, Stockhorse, Costume and Hunter Hack classes. His dam, Campbelltown Harfa (Santarabia Navarro / Iraki Mikasa) came from some of Australia’s oldest Crabbet bloodlines preserved by some of Australia’s oldest Arabian studfarms. Put together, this pedigree and its resulting phenotype made for a classically handsome Crabbet stallion, all curves and a big, impressive front, well-proportioned, with substance, bone, a great set of legs with a natural ability to move well, and a high flagging tail to proudly proclaim his breed. He also passes on his superb temperament to his offspring. 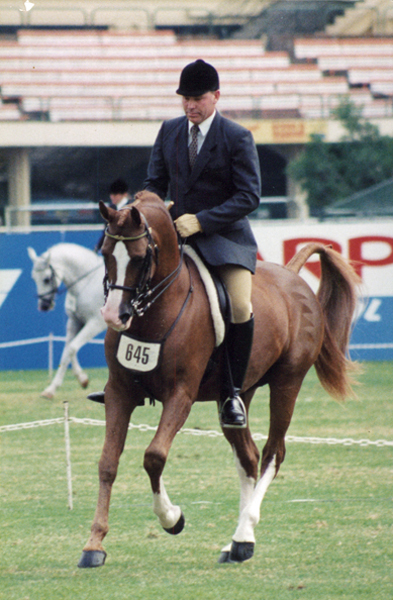 He was also Champion Ridden Stallion at the National Arabian Stud Horse Show of 1992, where he also won the Medium and Advanced Dressage. These were in the days of big fields of impressive ridden stallions. He crowned all this by twice winning the WJB Murphy Memorial Trophy for the Best Ridden Arabian Stallion or Colt at the Sydney Royal Easter Show, in 1993 and 1994. He was the only stallion to have won in consecutive years and he only competed twice. He retired from showing in 1997 but by then his progeny were starting out.

Of course a stallion is twice-judged by history – once for his own prowess, and once more for the progeny he produces. Sunland Australian Ambassador did not disappoint. He reproduced his own considerable attributes in full, with a variety of well-bred Arabian, Thoroughbred and Pony mares.

His Purebred son, the chestnut Nevertire Magnum, was foaled in 1990, out of the mare O’Rhisleanne. Owned by Sue and Tony Warren, his list of wins in shows and dressage is huge. To highlight just a few – Champion Ridden Stallion of the National Arabian Stud Horse Show, Elementary Dressage Horse of the Year NSW 1996, Champion in the East Coast Cup 2001, Reserve Champion East Coast Cup 1997, Australian Champion Novice Dressage 1996, multi-Champion of the Arabian Saddle Horse Championships, who has also competed successfully in endurance.

A busy little “person” who gives Narelle a great deal of pleasure is the chestnut sabino Arabian Pony Gelding Nevertire Mr Darcy out of Roseacre Black Lace. He is quite certain he is the most important pony in the entire universe, who started competition well with a Championship at the NSW Foal Show, a Top 5 at the Australian Championships, and a Reserve Championship at the East Coast Championships of 2006. After a few years’ break he once again resumed his career at the top both at halter and under saddle. He now has numerous wins and Championships in Novice and Preliminary Dressage to his credit including NSW Pony Dressage Preliminary Champion of 2009. He was Champion Led Arabian Pony Gelding in 2013 at the “Aussies”. Narelle, who is not tall, finds him a perfect size for riding, and a perfect mount for pony dressage which is very popular. He has also tried some jumping which he loves.