The Arab Horse Society of the United Kingdom are proud to announce that Silvern Prince has been awarded their 2015 WAHO Trophy in recognition of his outstanding achievements under saddle.

Silvern Prince (“Princey”) is the product of 5 generations of British Breeding from the foundation mare, Risseefa, at Worth Arabian Stud which started in 1960 on part of Crabbet Park. Of classic Crabbet pedigree, he is by the AHS Premium Stallion Prince Sadik, and out of the AHS Premium Mare, Silvern Image. Arguably the most successful British Ridden Arabian of the last few years, Silvern Prince has taken nearly all the major ridden titles there are to win. His owner and breeder, Caroline Sussex of Binley Arabian Stud (the daughter of Richard & Rosemary Archer of Worth Arabian Stud) is absolutely thrilled and honoured with this award, which was officially presented at the Society’s Annual National Championship Show at Malvern in July.

But his ridden show career so nearly came to an abrupt end. Having already done very well under saddle in the 2005 and 2006, it was decided in 2007 to send Prince to Twemlows Stud & AI Centre to collect and freeze his semen. Unfortunately, when the vet came to do the relevant tests an irregular heart rate was diagnosed as an atrial fibrillation. Whilst this can correct itself, Princey’s had not and he was referred immediately to the O’Gorman Slater & Maine Veterinary Hospital to have this potentially very serious heart condition corrected with quinidine. The good news was that eventually Princey responded, but he then had to have a long break from work to recover. Recent articles have shown that quite a few top competition horses have this condition and many retire from work as a result. Corrective procedures do not always work so Princey was lucky and it is a tribute to him that he has achieved so much since then.

Returning for a few shows in 2008, Prince showed he still retained enough promise for the plan to aim him at the highest titles to be put into action. In 2009, Caroline fulfilled her own special dream when she rode Silvern Prince herself at the prestigious Horse of the Year Show coming 5th in the Ridden Stallions class and was highest placed amateur rider. To ride a horse you have bred and own at this, the biggest multi-event horse show on the calendar in Britain, is something very special and Princey’s exceptional temperament dealt with the whole situation incredibly well. He had never competed in any environment like it before and took it all in his stride with perfect manners.

In 2010, Darren Crowe took over the ride and that same year, having already won several major titles, the season culminated with an exceptionally happy day for all his connections, when Silvern Prince was crowned Ridden Arabian of the Year at the Horse of the Year Show. In 2011 he was unbeaten all year in Ridden Stallion Classes, finishing with the title of HOYS Reserve Ridden Arabian of the Year. Amongst his many other achievements, he was unbeaten at the UK International Show winning the stallion title three times and twice taking the Supreme Ridden Championship there, after initially being Reserve in 2010. He has also won the Royal International Arabian Championship, is a multi winner at Regional Group Shows and in 2013 he finally took the only major title that had previously eluded him, that of British National Champion Ridden Stallion. Having achieved so much, Silvern Prince was then retired with honour from the show ring.

Having been so busy with his ridden career, his breeding duties have had to take second place, so Princey doesn’t have many foals on the ground as yet but he would love to have more! He has had all fillies apart from one spectacular colt, described by many as perfect and better than his sire. Two fillies were born in 2015, one in UK and one in France. He looks forward to more foals in the future. 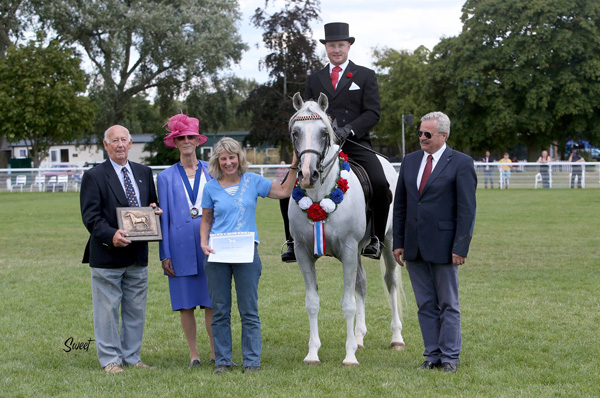 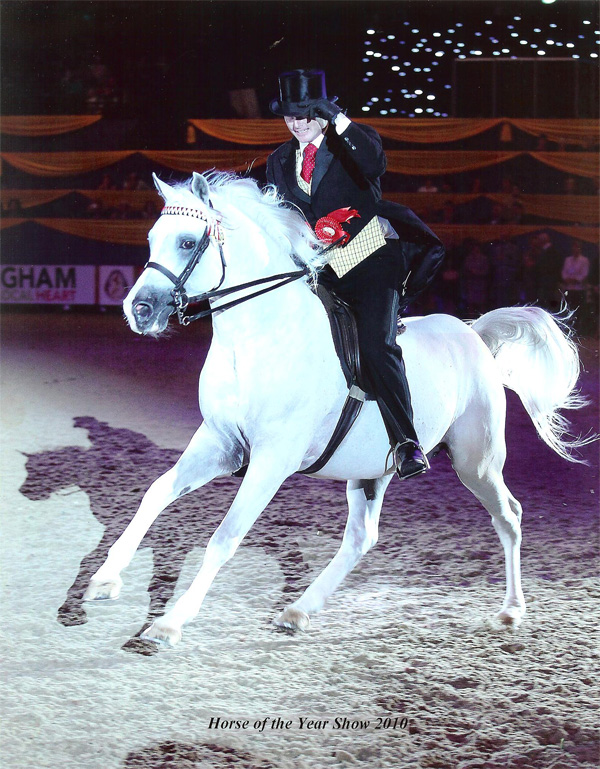 Silvern Prince ridden by Darren Crowe, winning the title of Ridden Arabian of the Year at the 2010 Horse of the Year Show.