In his birth year of 1992 Sheikan Star became Reserve-Champion colt foal at the Dutch National Championships. His best international placing in halter was a 3rd place in his junior stallion class at the Salon du Cheval World Championships in Paris.

Sheikan Star then went on to have a fantastic career as a racehorse himself, and later as a sire of many sporthorses. On the race-track he took first place 14 times, second place 9 times, and he also has 11 third place finishes on his impressive record. With this list of achievements he made it up to 71 kg of General Handicap and earned himself a Studbook Sporthorse Achievement Award for racing.

Furthermore Sheikan Star has been presented under saddle in dressage, showjumping and eventing at several National Federation competitions. In 2000 Sheikan Star became Dutch National Champion Endurance level II. At the age of 7 Sheikan Star was awarded a 2nd premium at the Dutch Stallion licensing of 1999. He is now a proven sire of sporthorses. A few of his best performing offspring are:

This impressive list of achievements and his well-performing offspring earned him the WAHO Trophy for the year 2009. The Trophy was presented by Mr. Gideon Reisel, Registrar of the Dutch Studbook, to Sheikan Star’s owner/breeder Margje van der Starre, on the occasion of the Dutch National Championships, 12 September 2009. 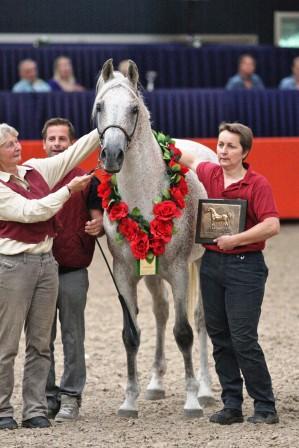