The SZAP is pleased to announce the winner of their 2017 WAHO Trophy is the outstanding 20-year old mare, Sha Mara. Having bravely recovered from injury more than once in her long career to compete successfully in open competition with other breeds, she is an excellent ambassador for the Arabian horses of Switzerland. 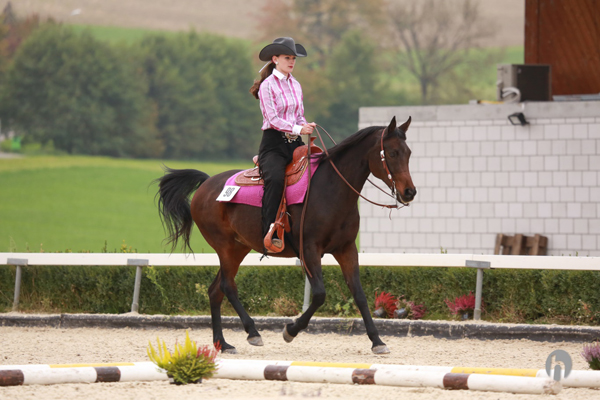 Sha Mara was bred by Ursula and Fritz Abbühl from Sha Arabians and purchased as a 3-year-old by Mrs. Dorina Karrer.

At her first show in 2001, the SZAP “Beständeschau”, she already charmed the judges and achieved great results. After her training in classical dressage she matured to be a great family horse with an incredible will-to-please. From her Tersk-bred sire Dosator she inherited her good conformation, her nice movements and the determination for performance, while she received her gentle and loving nature from her Straight Egyptian dam, El Calif Manaba Banat Safin. Not always an easy combination and added with her temperament sometimes quite challenging for the rider. Yet she was an amazing and patient teacher for the family’s two daughters through their first years of riding. She always was a great portrait of the Arabian’s versatility be it in dressage lessons, jumping or ground work.

In 2007 the older daughter Melanie discovered her passion for western riding, so Sha Mara was also trained in this discipline. From the start Sha Mara showed great enthusiasm and proved to be very talented. Soon the duo started competing in national western competitions and it didn’t take long until they brought home their first blue ribbons.

Unfortunately the mare suffered from a tendon injury in 2009 with an uncertain prognosis. With incredible patience, she stood through her recovery and was back under saddle a lot sooner than anyone would have expected. To give her enough time to heal, we decided to fulfil a long-cherished dream and breed a foal out of Sha Mara. Hence her filly Mehira by Shaklan Ibn Bengali was born 2011 and Sha Mara proved to be a wonderful and caring mother. Mehira is now following her mother’s footsteps and growing into a very talented riding horse. 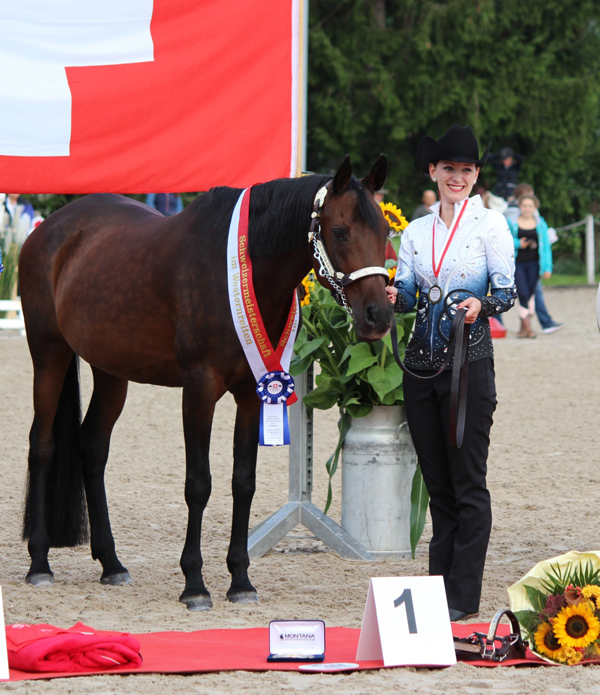 After another injury in 2011, Sha Mara and Melanie made their comeback to competing in 2012. After a great season they won the award for the best western horse of the SZAP, an achievement they repeated in 2014, 2015, 2016 and 2017. In that period they were SWRA (Swiss Western Riding Association) High Point Champion as well as Reserve Champion at Showmanship at Halter LK2A and B (second highest national level) in youth and amateur. Further they accomplished several top 5 and top 10 placings at the Swiss Championships in Showmanship at Halter, Hunt Seat Equitation and Hunter under the Saddle.

This is how the successful story of this wonderful mare should have continued, but in winter 2016 she fell on ice and injured herself severely, leaving the vets fearing the end of her competition career. Yet again, she proved her strong will and made a full recovery. After a lot of physical therapy and careful training, she found her way back to her previous glory. To everyone’s great surprise, she now presented herself better than ever before under saddle. “Like a good bottle of wine”, she becomes more terrific to ride with every year of age.

She reached the peak of her career in 2017 by winning the gold medal at the Swiss Championships in Showmanship at Halter. A long cherished dream achieved through the dedication of her rider Melanie was fulfilled. It had been more than ten years ago that an Arabian horse had acquired a national title in a western class, which makes this award even more special. Furthermore, the duo also won once again the High Point Champion in Showmanship at Halter and the Reserve High Point Champion in Western Horsemanship and moved up to compete in the LK1A (highest level).

With 20 years of age Sha Mara has developed into a wonderful and strong-willed personality. She is very experienced in the show ring and has a really straightforward and adorable character. She is our treasure and we really hope to be able to spend many more years with this horse of a lifetime.