BAPS is pleased to announced their 2021 WAHO Trophy winner is the remarkable endurance competitor, SD Mengali. 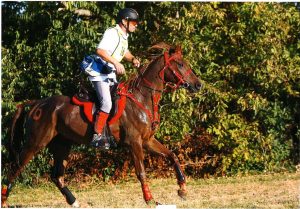 There are horses which – without necessarily landing prestigious victories, picking up international medals or racking up championship podium places – make their mark courtesy of the regularity of their performance, their sheer tenacity and personality, and in doing so define an era, an entire generation and beyond.  In the world of Belgian endurance competition, the above certainly applies to SD Mengali whose high level of constancy and consistency over a 12-year career continue to command admiration and huge respect to this very day.

The veritable phenomenon that is this liver chestnut gelding, no taller than 150cm with a tough and sturdy character, was born in 1999, bred by Dominique and Sabrina Francois at their SD Arabians in the southwest of Belgium.  His pedigree comprises mainly Russian bloodlines with additional old English and Crabbet lines, both known for their excellence in producing not just show horses but also top quality endurance horses.

The long-time owner of SD Mengali, Pierrot Di Geronimo, who was a member of the armed forces and an excellent sportsman, only took up riding at the age of 40.  When he acquired SD Mengali as a 4-year old in 2003, all he originally wanted was a horse for his wife, Pascale Blanche, for some gentle riding and trekking.  Before long, attracted by the idea of the sport of endurance, Pierrot took over the ride.  He made up for his lack of technical skills by an incredible number of long and slow rides out on the hills, as he had the benefit of living in an area which eminently lends itself to this type of training. Showing lots of patience and a highly meticulous approach, Pierrot managed to turn the young SD Mengali into a genuine athlete over the course of two years. Impressed by the rider-horse pairing, veterinarian Isabelle Caudron showed the duo the way to endurance racing, where they were very quickly spotted by the staff of the Belgian National team. This marked the start of a beautiful true story.

“Mengali and Pierrot, Pierrot and Mengali”. Two names that were inseparable for over a decade, which, to this very day, command huge respect for their flawless track record, even though it did not come with honorary titles or medals. Humble, discreet, hard-working, patient, self-sacrificing and bound by a close-knit bond. The story of this pairing is a lesson in values.

Today, SD Mengali, Pierrot and Pascale still live in the Ardennes that are so dear to them, based at the European Horse Centre of Mont-le-Soie as the stables’ caretakers. Remaining active into what will soon be his 23rd year, SD Mengali is taken out for long daily rides by Pascale. In 2021, he added another 1,500 kilometres to his name.  Meanwhile Pierrot, now at age 65, seems to have finally found a worthy successor for SD Mengali in another liver chestnut gelding, Hahdes Nheeon, born in 2014 and again mainly of Russian and old English bloodlines, which he has already trained up to International level. Why change the habit of a lifetime?