At the recent General Meeting of the Associação Portuguesa do Cavalo Arabe it was decided that the winner of our 2005 WAHO Trophy would be the stallion Quiko Al Oásis. He was chosen for this award because of his wonderful temperament and undeniable popularity in Portuguese Bullfight; as such he is the pride of our Portuguese Arabian Horses. Note that Portuguese mounted bullfighting is a sport performance where the bull is not killed; it was originally the pastime of the gentry and the royal family, developed from the war exercises of the middle ages. It demonstrates the training and schooling of the horse and is conducted under a strict ‘code of honour’. It is an extraordinary show of a horse’s courage, elegance and dexterity and also shows a high level of trust in the partnership between rider and horse. The horses taking part in this sport, also known in Portugal as Toureio Equestre, must be very well schooled to the highest level of dressage, supple and quick to respond, as well as brave. 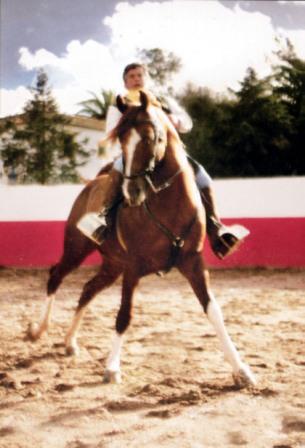