The AVS have announced that their 2016 WAHO Trophy was awarded to Oosterveld’s Marsaz, who was born on the 29th June 1978. He now holds the record as the oldest horse to be awarded the WAHO Trophy in any country, and the Netherlands could not have chosen a more deserving winner than this grand old stallion. 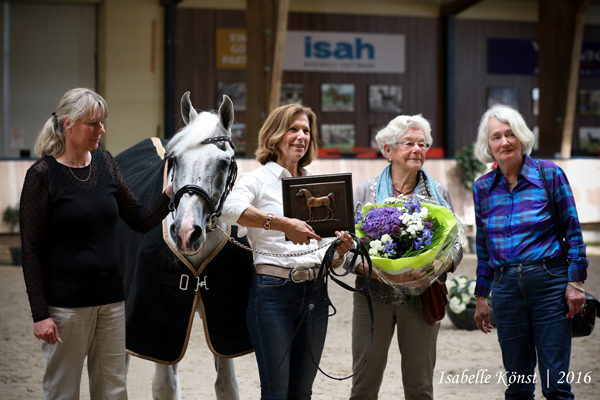 This mostly Crabbet bred Arabian horse, whose sire Rissaz (Indriss / Kazra, bred by Mrs. Joanna Maxwell) and dam Maid Marion (K of K / Good Friday, bred by Thriplow Farms) were both imported to Holland from Great Britain, is a licensed stallion for both the AVS and NRPS (Dutch Arabian Partbred Riding horses and Pony Studbook). His own sport performance includes Jumping level M (1.20m), Z1 dressage and 120km endurance. He is also frequently used at home on the farm by his owners as a learning horse for beginning riders and in a branch of equestrian sport in which few Arabs are active: Vaulting.

Marsaz has 35 registered Purebred foals and a multitude of Part-bred offspring, who are all known for their great athletic achievements and their outstanding characters. Ms. Toto Modderman, member of the AVS committee that evaluates the WAHO trophy nominees, writes about this particular stallion: “Oosterveld’s Marsaz has been awarded the WAHO Trophy 2016. With his age of 38 (!) he shows to be tough, has successful progeny and is himself a very versatile horse. We should be proud that we have such a great ambassodor of the breed in our studbook. Also owner Alice Sticker-Westerveld deserves to be put in the spotlight; her horses reach old age, while still worked wisely to their ability!”

On August 14th 2016 Oosterveld’s Marsaz came to the AVS National Championships, neatly braided and groomed to perfection, to receive his award personally with owner Alice by his side. The affection and respect for this horse in the audience was palpable. There, this majestic classic king trotted with his tail up and ears forward, fitter than many twenty year old peers. His shining eyes and alert look showed his enjoyment for the attention on a well-deserved victory lap in the AVS National Championship show-ring.