The Belgian Arabian Horse Registry (BAPS) decided to select their 2005 WAHO Trophy winner from the discipline of Arabian racing. As of 2001, when he started his career on the racetrack, Onado has won 7 races from 37 runs, and a total of Euros 20,736 in prize money. He was also placed 2nd 7 times, 3rd 10 times, and 4th 3 times. This outstanding achievement led to him being awarded the titles of AHRCB Belgium Racehorse of the Year 2004 & Best Belgian-bred of the Year 2004. He is trained by his owner and breeder, Johan Verstrepen. 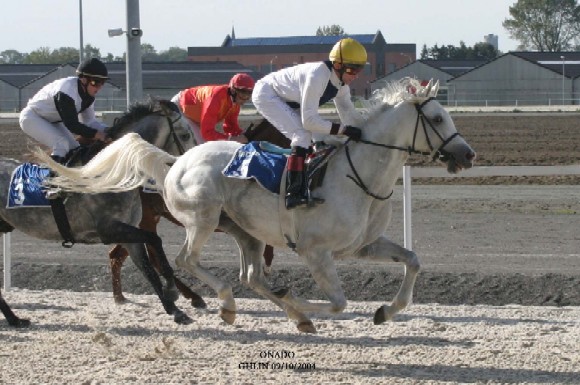 Onado is not just a great athlete but also a true to type Arabian. Definitely the darling of the crowd, even among thoroughbred race-goers, he performed as well over short distances (winning a 1300m race at Duindigt, where he is still the record-holder for that distance, and gaining a creditable 3rd place in Newbury 2005 in a Gr. I race over 1200m), as he did in the longer races, proving his typical Arabian staying power by winning a 3000m race in Boitsfort in 2002. As a race-horse, he looks and behaves as an Arabian, his tail carried high like a banner as he always tries to take the lead from the start and shows every determination to keep that lead to the finishing post.

As his breeder, Johan is very proud of Onado and also of his dam, Alissah, whose four sons all became “Horse of the Year” in the AHRCB-races. Ganesh Ibn Kendal, full brother to Onado, is now active in endurance-riding. Sadly, Alissah passed away in 2005, but hopefully her daughters Lakshmi El Kendal (full sister to Onado ) and Nowara D.A.(by Djel Bon) will duly replace their mother at Dijkhoeve Arabians for more successful racing-progeny.