The Norwegian Arab Horse Society has provided the following information. In 2017, 5 foals were registered. There were 8 exports and 10 imports. There were 4 National shows and approximately 30 endurance competitions.

NAHF do allow use of artificial insemination, transported semen. We do not for the moment allow embryo transfer. But we will register imports produced by embryo transfer.

NAHF are now running two shows every year, one international show in June / July and one national show in August. At the national show it is also classes for riding, jumping and western. Futurity Cup for yearlings has been a popular introduction at the national show. The Arabian horse are used in ridden classes, jumping, driving, racing, endurance and western riding, but mostly the Arab horse in Norway are used as a ” family horse”. The Norwegian Riding Federation arrange all activities for ridden classes, jumping and endurance, this are classes open for all breeds. At NAHF national show the performance classes are only for the purebred Arabian horse. Racing is run by the Norwegian Jockey Club, and they have only a few races for purebred Arabians in Norway, but it is possible to go to Sweden – were they have races more regularly.

Fortunately we can see a growing activity, and the Society is working to encourage owners to use their horses in performance competitions.

The Norwegian Arabian Horse Society has arranged different seminar to educate their members in history, care and use of the purebred Arabian horse. The Society has a magazine, published 3- 4 times pr. year , with information an articles to educate our members.

The current published stud book for Norway is volume 5, covering the period 1991-1997. A supplement for the period 1998-2005 will be published this year, our plan is then to publish the next stud book in 2009. We are working with a new database and we hope this will come into use at the end of this year.

In 2005 we registered 32 foals, but there are still some pending that will be registered this year. In 2006 we registered 28 foals and about 20 are still pending registration. The number of foals over the past 5 years has been between 40 to 60. In Norway we still have licensing for stallions being used for breeding, this is mostly because the National Authorities want to have the same system for all the different breeds in Norway. The Norwegian Registry will register all foals as long as they fulfill the requirements to be a purebred Arabian, even if the stallion is not licensed. Today we have about 50 stallions that have been licensed, about 15 to 20 have been used for breeding. The number of broodmares is about 200, normally 50 to 60 are covered in a year. The estimated number of living Arabians is 750. Numbers of imports are about 20 to 25 each year, and between 1 and 3 horses are exported each year.

Norway has been blood-typing foals and imports since 1985, from 2000 we changed to DNA, although for a period we had to use both systems. Our national authorities demand that every horse has a passport, and from 2007 all horses have to be micro-chipped, and it is an ISO standard system that we are using. We do allow the use of Artificial Insemination and transported semen, but we do not for the moment allow Embryo transfer but we will register imports produced by this method.

We run 2 shows every year, one international show normally in June or July, and our National show in August. At the National Show there are also classes for riding, jumping and western. Local shows are also arranged, one in the north of Norway, north of even the polar circle, normally this show is held every 2nd year. Our Arabian horses are used for riding, jumping, driving, racing, endurance and western riding. But mostly the Arabian horses in Norway are used as family horses. The Norwegian Riding Federation arranges all activities for ridden classes, jumping and endurance, these classes are open for all breeds. At the National Show the performance classes are only for purebred Arabians. Racing is run by the Norwegian Jockey Club, and they have only a few races for purebred Arabians in Norway, but the owners also have the possibility to race their horses in Sweden and Denmark. We can see a growth in the activities and the Society is working for encouraging owners to use their horses in performance competition.

The Norwegian Arabian Horse Society has arranged different seminars to educate our members in the history, care and use of the purebred Arabian horse, normally they have one course every year.

The Norwegian Arab Horse Society is pleased to announce the winner of their 2007 WAHO Trophy winner is one of their best endurance horses, KA Ferrari. Among his most excellent results and titles are that of 2007 Nordic-Baltic Endurance Champion (124 km ride in Denmark) and Norwegian Senior Champion (128 km in Rendalen). In 2008 he completed the Grand-Prix endurance ride at the 160 km FEI-competition in Sweden.

He was also the Norwegian Riding Association’s Championship-winner in 2006 and 2007, this is an annual award to the horse and rider with most points in endurance each season, the points are given for each class, according to the number of competitors and the result.

KA Ferrari is also used for therapy-riding for children and youths. He also competes in lower levels showjumping. Ferrari, who is from all Polish bloodlines, is an amazing horse who not only has great athletic abilities, but also an equally great personality.

The Norwegian Arab Horse Society is pleased to announce that Wielki Pawo has been awarded their 2006 WAHO Trophy. This lovely stallion of predominantly Polish bloodlines has been champion several times at international shows as well as gaining Best in Show titles.

He also excels under saddle. Over the last few years he has been trained and ridden in several competitions including dressage, with good results.

His wonderful temperament has also allowed him to be used for some rather unusual assignments. He has been used by an artist who wanted photos with a horse in different kinds of situations. The first time it was by the photographer Knut Bry who wanted to make a poster for a play. Wielki Pawo was the horse he chose, and he took the horse indoors onto the stage of the Oslo National Theatre to get the poster he wanted. In the summer of 2006 another artist, Kristin Gunter, wanted to show the movement of a horse from a very different viewpoint – from directly underneath. This was a very complicated project because the horse had to trot across a bridge made of Plexiglas which was 15 metres long and suspended 1.5 metres above ground level.

An Arabian was perfect for this job because the horse could not be too heavy (due to the strength of the Plexiglas), and again Wielki Pawo was chosen. The artist then stood underneath this Plexiglas bridge, filming the horse. Kristin Gunter showed this film at Kistefoss museum with very great success.

To successfully meet such unusual challenges, a horse must have tremendous trust and confidence in his handler in what he is being asked to do. Therefore, it was considered that for the above reasons, as well as for his beauty and show wins, Wielki Pawo displays the best Arabian attributes to a high degree, and is a worthy ambassador of the breed in Norway. 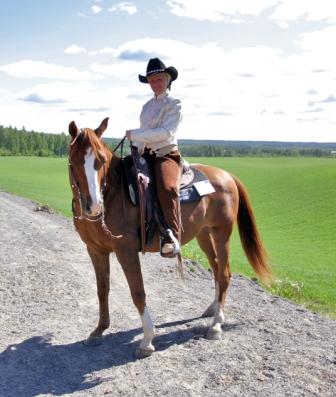