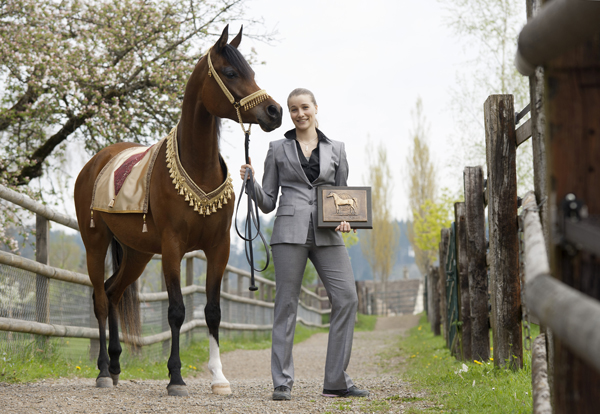 “Our first encounter with MZ Djlshada was at the Stocks Show in Bern in 2011. As the winner of the prize for ‘Best Foal Bred in Switzerland’ at her previous show, this pretty and perky girl could win this prize again. A personal blow forced the family of breeders of this most promising foal to pass her on to someone who would promote her in the show and breeding scene. It was an honour to receive MZ Djishada at our stud farm. In accordance with the wish of the breeder we sent her in spring to Mary Long for show training. After a few trial runs at smaller shows, in 2012 she won the ‘Junior Gold Champion Title’ in Marbach, Germany . In order not to tire her out, we didn’t try for another victory and prepared her carefully for the show season 2013.

We noticed that she enjoyed to be presented, it was all fun to her. She was never stressed at any show, on the contrary, she was enjoying the attention of the entire house staff and became the charming barn favorite. In her regal way, ‘Chilly’ danced from one success to another, always with her loyal fan club, ‘The Pink Ladies’. The first highlight was the winning of the prize ‘The Best Horse Bred in Switzerland in 2013’ followed by the incredible ‘International Junior Gold Champion’ title at the Kauber Platte Germany.

We then entered MZ Djlshada in the famous ‘All Nations Cup’ in Aachen, where she achieved 4th place with an excellent score of 90.76. ‘Chilly’ represented Switzerland at the flag-raising ceremony. Following this success in Aachen we entered her in Verona for the European Championship and were not disappointed. She won the European Junior Bronze Filly Champion title against strong competition. What a great success for Switzerland!

As her final show this year, we went with her to Paris to the World Championship. In the hand of Luca Oberti, ‘Chilly ‘ once again gave everything and presented herself perfectly. It was great to see our horse in this big arena. With this glamorous appearance we finished the show season 2013. We didn’t accept the invitation to Abu Dhabi, and instead of that we offered the young ‘diva’ some resting time at home in the pastures of our farm. Certainly, we will present this beautiful horse as a mature mare in the show ring again in the future.

MZ Djlshada has distinguished herself not only by her excellent results in the show, but also by her loving and calm character, which contradicts the often quoted image of a nervous and stressed show horse.”