The Russian Arabian Horse Stud Book and the Russian Ministry of Agriculture – Rosplemkonzavod, have awarded the 2005 WAHO Trophy for Russia to the stallion Madiar, Race and Show Champion. Madiar combines a classic Russian pedigree with athletic prowess and beauty and is a well-deserving winner of the first WAHO Trophy for Russia.

This outstanding horse was born in Tersk stud – the cradle of Russian Arabian horses. He is a tall (1m 60 cm), powerful stallion with fantastic movement, whose charisma makes this special unforgettable impression on everybody who sees him.

He has a superlative race record, racing for six seasons from the age of 2 to 7. From his first race he proved himself as a serious racehorse, starting his career with a win in the Grand Prix for 2-year- olds, the most prestigious race for young horses in Russia. After that he never left a chance for others in the major races for 3-year-olds and older horses. Madiar is the “Triple Crown” holder not only according to the traditional Russian system, winning major events in each age group – Grand Prix for 2-year olds, Russian Derby and “Topol” Stakes; but also according to European classification, coming first in Group 1 races for 3-year-olds: Derby, “Grand Summer” Stakes and “Budenny” Stakes. He also won other top class races including the Aswan Prize, and the Grand Sprinter prize. Madiar also proved his top class on the European tracks: in 1998 he won the Darc Stakes in The Netherlands and the Prix Pompadour in Switzerland. In 2000 he came second in the Nagrada Europa in Warsaw. Altogether, his career race record is 31 = 15-9-2. This is how his life long trainer Alexander Hubulov describes him: “However competitive and strong Madiar’s opponents were, I was always confident that he would give the race 100%, and even one thing more, which is only possessed by special race horses – his heart”.

After his successful racing career, Madiar returned to his home stud to start his new career as a breeding stallion. In 2004, he proved again his Champion status, but this time in the show ring, his exceptional movement and excellent Arabian type winning him the title of Senior Champion stallion during Saint Petersburg ECAHO C-show.

His success on the racetracks and in the show ring is largely owed to Madiar’s exceptional pedigree. His sire Drug (by Prizrak and out of Karinka – one of the best mares in Tersk history and still a race record holder) was 1991 European Show Champion and twice named European Racehorse of the Year (1990 and 1991). Altogether, Drug has left big impact on the Arabian breed worldwide. Madiar’s dam, Martinika, is the daughter of renowned Aswan and out of the famous broodmare Monogramma. The full sister of Madiar, Madiera, is currently one of the best broodmares in Tersk, and her first filly, Mari, in 2004 smashed two National race records over 1000 m and 1200 m. 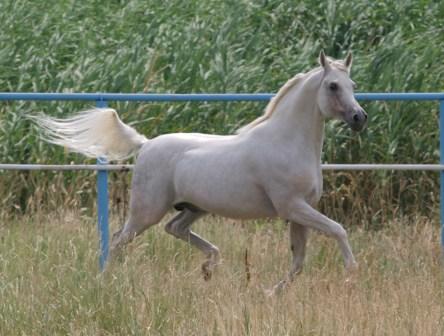 Due his to long racing career, Madiar started producing in the stud relatively late, but already there are a number of true racetrack “fighters” among his offspring. These include Vahmister, winner of a number of prestigious races in Kazakhstan; Vamplana, who was second in the Oaks in 2005; Medium, who had a good racing career on the Moscow racetrack; and Pyatigorsk racetrack favorites Kaiman and Monomah.