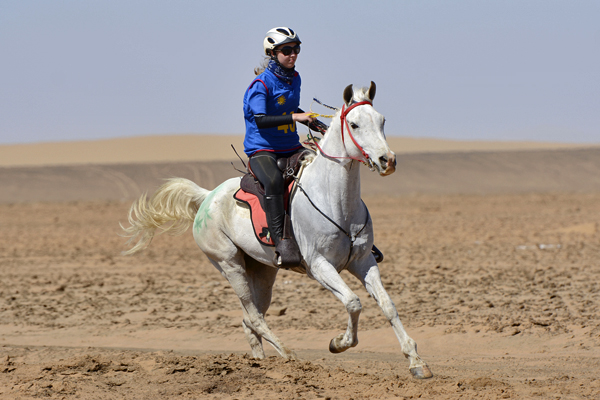 Kalharabi Dakar has been awarded Namibia’s 2014 WAHO Trophy. He was born in the eastern savannas of Namibia, on the farm Valerie, on the 15th of February 2003. Dakar is a stallion by birth and a champion by heart.

Kalharabi Dakar started his endurance riding career as a gelding in 2008, and was mainly ridden by Suné Wessels throughout. Dakar finished seven 120 km rides and two 160 km rides and always finished in the top 3 in his category. His outstanding performances in 2014 were just the cherry on the cake of his career this far. He finished 1st (10:11:34) at the Stephanus Pienaar Memorial ride, March 2014, in the 160 km CEI*** Junior category with Suné. He was chosen with Suné for the Namibian team to take part in the TriNations Endurance event in May, in Parys, South Africa. He came 3rd (5:44:25) in the Junior Division FEI 120 km of the ride. Dakar and Suné represent the Namibian team again in the African Championships, held in Walvisbay in August. Dakar finished well in 1st place (6:46:10) in Junior FEI 120 km category. Dakar won with Suné for the 3rd year in a row, the NERA Junior Rider of the Year trophy.
Dakar also won the Best Performance of a Purebred Arabian in the Jnr Category, Walvisbay Championships 2014.

Kalharabi Dakar is and always has been a horse to rely on and has never let his rider down. He is as friendly as he is dependable and willing as a horse; he is both a a pleasure and a pride to all his connections.