Belgium is very pleased to announce that they have awarded their 2013 WAHO Trophy to the straight Egyptian stallion JK OMAR. His first descendants have achieved very good results in endurance. They include the 7 year old gelding CANNA D, who joined in the EWALRAID programme (Ecurie Wallonne d’Endurance) with the cooperation of the University of Liege. In 2011 he was Belgian Champion of the endurance horses of 5 years old. He won the championship for the 6-year-old horses in 2012 and the “Belgium Cup”. In 2013 he won his first CEI* (100 km) in the Grand Duchy of Luxembourg. From the 11 competitions he took part in, he obtained 6 victories and 3 second places. He was announced “promising sport horse” in 2012 by the GELP (Groupement Equestre de la Province de Liège). The stallion COSMOS D, another son of JK OMAR, won the bronze medal at the Belgian endurance championship for 5-year-old horses in 2011. In 2012 he won an 80 km ride in the Grand Duchy of Luxembourg. He was qualified at the CEI* from Rouvroy in 2013. COSMOS D also joined in the EWALRAID programme.

JK OMAR is also father of some beautiful mares who are equally promising for the demanding sport of endurance, including NOUR H, a 5 year old who was second in her first long distance race over 60 km in Rendeu. Another daughter of JK OMAR, the 5-year-old EPILOBE, was chosen for the EWALRAID programme as only Belgian-bred horse in 2013.

All descendants of JK OMAR which were introduced to the EWALRAID programme passed their veterinary tests (mostly diffraction tests and radiological examination of the feet and legs, examination of the movements). These horses also recover very fast after exertion.
JK OMAR gives his descendants a beautiful topline, very good legs and a pleasant character. His descendants are easy to introduce to the saddle. Due to the fact that JK OMAR passes all these qualities to his descendants, it is quite deserved that he receives the WAHO trophy! Congratulations! 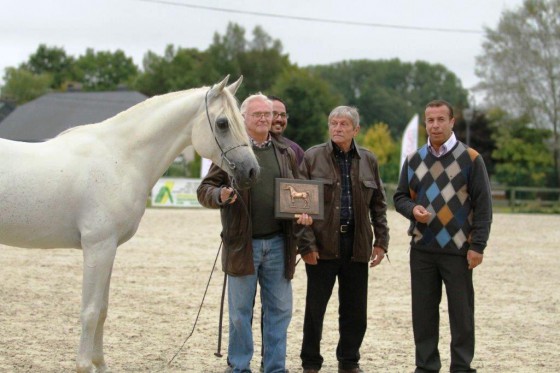 Photo: The presentation of the WAHO Trophy 2013 to JK OMAR during the Belgian Championship Show in Libramont on the 22nd of September 2013. From left to right next to JK OMAR: Jean Dardenne, owner of JK OMAR, Ali Shah who showed JK OMAR, Winand Bijnens – Registrar BAPS npo and Dr. Samy Abdellich, President of BAPS npo who gave the Trophy to Jean Dardenne who was very happy to receive it on behalf of his stallion. Picture copyright: Bart Beckers