The Arab Horse Breeders Society of Namibia is pleased to announce the winner of their 2019 WAHO Trophy is the stallion Fareed Antar, a versatile Arabian stallion that has excelled and won at the highest level in Namibia at Endurance Riding competitions and Arabian Horse shows. He is still owned by his breeder, Leon Harmse. As well as his competitive career, Antar is also a breeding stallion. He was awarded the WAHO Trophy in recognition of his many achievements in endurance rides and horse shows, of which the following is a summary. 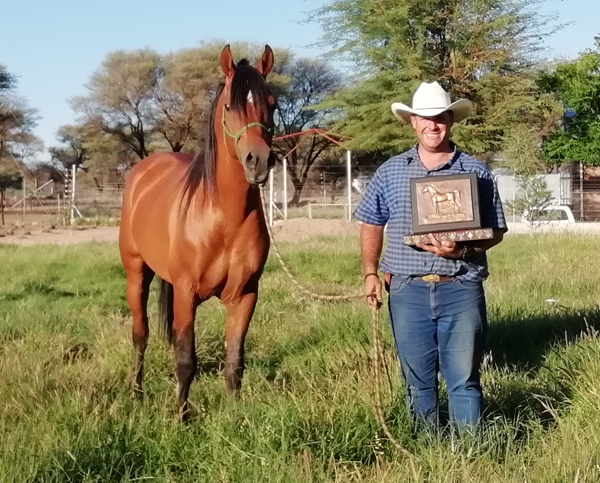 Fareed Antar with his owner and breed, Leon Harmse.

To date Fareed Antar has successfully completed 24 endurance rides for a total of 2022 competitive endurance kilometres. All these rides were ridden in the Heavyweight category with only one rider, his owner and breeder Leon Harmse. The 24 endurance rides he has completed consists of 2 x 40km, 2 x 60km, 15 x 80km and 5 x 120km rides.

Out of these 24 endurance rides he got the coveted Best Condition Horse Award 9 times. He also got 14 x 1st place, 4 x 2nd place and 2 x 3rd place meaning that in 24 rides he was on the podium and top 3 position 20 times.

2 out of the 5 of his 120km rides he completed was the tough and well known Walvisbay African Endurance Championship. At the 2017 Walvisbay ride Antar was also part of the Namibian Heavyweight team that won the team competition against the South African Heavyweight Team. Also at the 2017 Walvisbay ride Antar was awarded the Namibian Arabian Horse Breeders Associations trophy for the purebred registered arabian horse that performed the best in the Heavyweight category.