As a broodmare of distinction, she is the dam of 10 outstanding foals, including six daughters who all received broodmare status and are now founding their own dynasties in Poland or abroad, they include Enaria (sold at the 1985 Polish Ovation Sale for $520,000); Etruska, Etana, Ettoria, Esparceta and Epifraza. Even more significantly, Etruria is the dam of three chief sires:

Beautiful, feminine and a dynamic mover, Etruria was the most beloved mare of the late Mr. Andrzej Krzysztalowicz, long-time director of Janow Podlaski State Stud and a founding member of the first WAHO Executive Committee. Etruria had the great honour to accompany her old friend on his last journey, leading the funeral procession to his graveside. Etruria’s place in the history books of Polish Arabians is assured and she received her WAHO Trophy with her usual grace at a special ceremony during the 2005 Polish Arabian Horse Days Festival. On 23 January 2006, she will celebrate her 31st birthday. 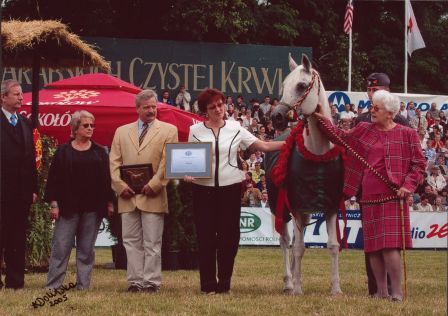