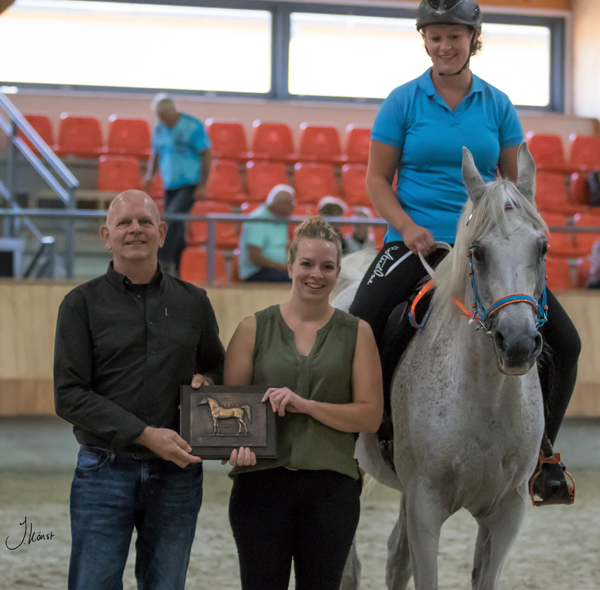 In the picture, holding the WAHO trophy are Theo and Erica Heldens, owners at time of the presentation and of course Prodigy-D himself, ridden by his current owner Georgette Zeijen.

The Dutch Arab Horse Society (AVS) is pleased to announce that their WAHO Trophy for 2018 has been awarded to the outstanding endurance horse, D-Prodigy. Also known as ‘Prody’, he was born in 2001 in the stables of Amber Bruijs-Leylayan of La Dolce Vita Arabians. His sire is the Swedish-bred stallion Primo [Engano/Polka) of all Polish bloodlines, his dam is the Gil daughter Dolce Vita, several generations Dutch-bred on the female line who carries Polish, Straight Egyptian and old Marbach bloodlines.
As a 3 year old, Prody was sold to the Heldens family from Meijel, Limburg, the Netherlands. After a short but successful dressage period ridden by daughter Erica Heldens, Prody started in the sport of endurance in 2005 with father Theo van Helden. Some highlights of their joint endurance achievements were the 100 milers in Most, Czech Republic and Florac, France, the World Championship for 8 year olds in Compiegne and the 2 day competition at the Alpe d’Huez.
In 2014, Prody faced physical problems which brought international competitions to a halt. Prody was however successfully treated and expectations lifted.
Georgette Zeijen then became Prody’s new rider and with Theo as coach, she rode her first endurance race in 2015 on a fully recovered Prody. In 2016, Georgette became Hippiade champion in Endurance class III and in 2017 she rode her first CEI* race in Ermelo, the Netherlands. In May 2018 all the hard work pinnacled where this combination became Champion at the Dutch CEI*** National Endurance Championship.
Theo and Erica Heldens still cheer Georgette and Prody on at all their races, although Georgette has recently become the proud new owner of Prody.
D-Prodigy is now 17 years old but it seems he is still in his prime. He has accumulated more than 2,700 race-miles and is therefore an excellent ambassador for the Arabian breed.
The Dutch WAHO trophy 2018 was awarded during the National Championship show 2018 in Ermelo, the Netherlands by AVS president Mrs. Sandra Boogaard (not pictured).