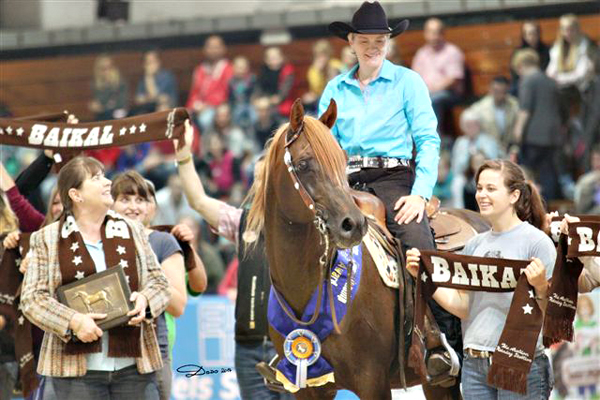 The owner of the stallion Baikal was happy and proud about winning Austria’s WAHO Trophy for the year 2014. The award ceremony took place on the occasion of the Championships in Wels in front of a large and enthusiastic audience.

This lovely chestnut stallion of predominantly Russian bloodlines, with a touch of old English lines on the damline, has been most successful for many years in the popular discipline of western riding competitions. Between 2002 and 2009 Baikal competed every year in the European Championships, more than any other horse. This was with different riders. During that time he achieved 2 Gold medals, 5 Silver medals and 1 Bronze medal in Reining and Trail. Since 2005 has been owned by Mrs. Petra Dries of the Fronleitenhof Stud, situated in Lower Austria. He has found a most great horsewoman in his regular rider, Mrs. Doris Pfann.

He also competes in open competition against other breeds, winning the Open All Round Champion title at Wiener Neustadt in Austria in 2010 against about 100 competitors, mostly Quarter horses, which was a great achievement.

Baikal was named 2009 Arab of the Year in a survey among readers of the former German magazine ‘Araber Journal’. 25 horses have a wonderful home at the Fronleitenhof Stud, an Arabian breeding farm dedicated to the “Western Arabian”, where all the adult horses are competing in western riding competitions.

Baikal is an exceptional stallion, extremely confident and willing to perform. He enjoys his daily work, otherwise he is not happy. After three hours in the pasture, he stands at the gate wanting to be brought in to “do something” more fun. He always tries his best and particularly enjoys Reining and Trail work. Baikal now has numerous progeny in Austria and with his popularity spreading worldwide and semen even being shipped to the USA, this allows his proud owner to expect more promising foals by him in the future.